San Francisco is already well-stocked at the top of the depth chart at the tight end position, but they are adding experienced depth. The 49ers are signing Tyler Kroft to a one-year deal, as announced by his agent (and passed along, on Twitter, by ESPN’s Adam Schefter). 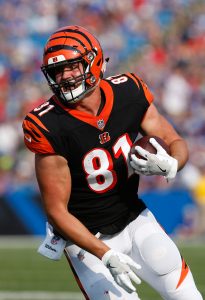 Kroft, 29, began his career with the Bengals in 2015, who drafted him in the third round. He played a rotational role in Cincinnati for the first two seasons of his career, but took on a starter’s workload in 2017. Starting all 16 contests in that campaign, he put up personal bests across the board, posting 42 catches for 404 yards and seven touchdowns.

Things took a turn for the worse in 2018, however. Kroft suffered a foot injury which ultimately landed him on IR and limited him to five games. Many felt that would limit the value of his next deal, but he received a three-year contract from the Bills that offseason. He was unavailable for 11 combined games across two seasons spent in Buffalo, again reduced to a rotational role when he was on the field.

That led him to a one-year deal with the Jets last offseason. The term of that contract was more in line with what was expected coming off of his Bengals tenure. In nine games in the Big Apple, Kroft made just 16 receptions, meaning it came as little surprise that he wouldn’t be returning after the team added C.J. Uzomah and Tyler Conklin in free agency.

In San Francisco, the Rutgers product will compete for playing time behind All-Pro George Kittle. If he can stay healthy, he should be able to contribute as a complimentary piece to the team’s passing game as they try to make another deep postseason run.