Another Day 1 wideout from last month’s draft is set to officially join the league. The Commanders are signing Jahan Dotson to his rookie deal (Twitter link via Nicki Jhabvala of the Washington Post). 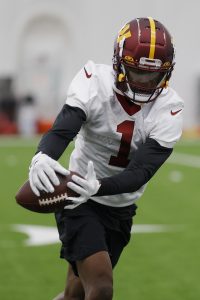 As the No. 16 pick, Dotson’s contract will be worth just over $15MM. The Penn State product had a four-year college career, which included significant production in his final two seasons. After playing behind fellow speedster KJ Hamler, he took on a larger workload in 2020. That year, he posted 884 yards and eight touchdowns despite the campaign being limited to just eight games.

Expected by many to be eyeing a wideout with the No. 11 pick, the Commanders traded down from that spot. They swapped with New Orleans, who gave up No. 16 to take Chris Olave. Situated at the end of a run on receivers as a result of the move, the Commanders had fewer options to choose from, but were still able to boost their passing game. Dotson will join the likes of Terry McLaurin, Curtis Samuel and Dyami Brown in their WR room, as they look to take a step forward on offense with Carson Wentz.