The Jets are doing the heavy lifting in their rookie deals first. After agreeing to terms with No. 4 overall pick Sauce Gardner, the Jets have signed the third of their first-rounders — Jermaine Johnson — to his four-year rookie contract. 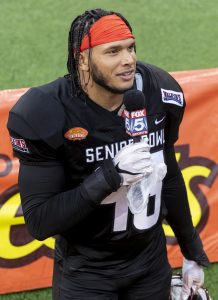 Johnson, who can be controlled through 2026 via the fifth-year option, will be tied to a fully guaranteed deal. Projected to go off the board earlier than he did, at No. 26, the Florida State product will be tasked with boosting a Jets edge rush that has been one of the NFL’s least effective position groups over the past decade and change.

Famously lacking an impact edge presence since the 2006 John Abraham trade, the Jets are now positioned to have Johnson and Carl Lawson. The latter is coming off a season-nullifying Achilles tear. He will now team with one of this draft’s best defensive end prospects.

Transferring from Georgia to Florida State last year, Johnson registered a career-high 11.5 sacks to go along with 17.5 tackles for loss last season. ESPN ranked Johnson as the No. 14 overall prospect, but he slid to the mid-20s, opening the door for the Jets to trade back into Round 1 for him. The Jets sent the Titans second-, third- and fifth-round picks to move up for Johnson, who will join Gardner in attempting to help a defense that ranked 32nd in both points and yardage in 2021.