Hours after agreeing to terms with the second of their two first-round picks, defensive lineman Devonte Wyatt, the Packers locked down their other first-rounder. 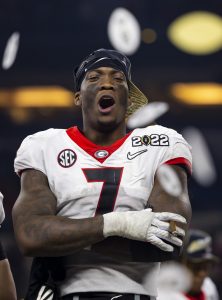 Wyatt’s ex-Georgia teammate, linebacker Quay Walker, is now under contract, according to NFL.com’s Tom Pelissero (on Twitter). Although the modern-era rookie signing process features far fewer complications than the negotiations before the 2011 CBA, with a slot system now in place, the Packers moved past any complications very early in this process. Walker and Wyatt’s signings coincide with the beginning of the Packers’ rookie minicamp.

Green Bay deviated considerably from a path of not devoting significant resources to its off-ball linebacker spots, selecting Walker 22nd overall a few weeks after giving 2021 free agency flier De’Vondre Campbell a big-ticket deal. Walker and Campbell represent the Packers’ biggest commitment to these two positions in over a decade.

Walker worked as a Bulldogs regular over the past three years, with his most significant contributions coming for the national champions’ dominant 2021 defense — one that saw five of its cogs drafted in the first round. Walker was the third of those Georgia defenders taken. The 6-foot-3 linebacker registered a career-best 65 tackles (5.5 for loss) as a senior last year. Via the fifth-year option that could later be exercised, Walker can be controlled on this rookie deal through 2026.