Friday has seen each of the Saints’ first round picks from this past draft sign their rookie contracts. New Orleans has reached an agreement with both receiver Chris Olave and offensive tackle Trevor Penning. 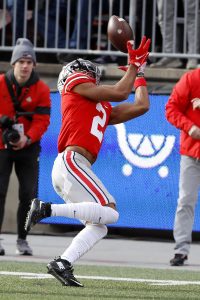 As ESPN’s Adam Schefter details (on Twitter), the deal for Olave is worth just over $19.27MM. The Ohio State alum put up consistent production over the course of his four seasons there. He was the team’s leading receiver in 2019 and 2020, but his best individual season came this past campaign.

Over the course of 11 games, Olave totalled 65 catches for 936 yards and 13 touchdowns. While those figures were eclipsed by 10th overall pick Garrett Wilson and phenom sophomore Jaxon Smith-Njigba, they represented his ability to produce despite a heated competition for targets. Given the Saints’ lack of receiving options, Olave was named as a candidate for the team to consider, so there was little surprise when the team traded up to select him at No. 11.

Penning, meanwhile, had already agreed to terms on his rookie contract before the Olave deal was announced (Twitter link via NFL Network’s Ian Rapoport). The Northern Iowa blocker showcased an appealing combination of size, length and athleticism throughout his time there, earning stellar PFF grades along the way. He held up against higher-quality competition at the Senior Bowl, confirming his status as a first-rounder. Predictably going later than Evan Neal, Ikem Ekwonu and Charles Cross, Penning was the fourth tackle off the board, landing at 19th overall.

Given the concerns related to his level of competition, as well as discipline, the six-foot-seven, 325-pounder might not be able to occupy the left tackle spot vacated by Terron Armstead right away. He is nevertheless viewed as a candidate to do so at least down the road, which would make him, like Olave, a pick aimed at filling glaring roster holes on Day 1. Penning will earn $14.1MM on his pact, per Pro Football Network’s Aaron Wilson (Twitter link).