The Steelers continued their trend of Day 2 wide receiver investments with George Pickens, and the former Georgia pass catcher is now under contract. Pickens is the first Steelers 2022 draftee to sign his four-year rookie deal. 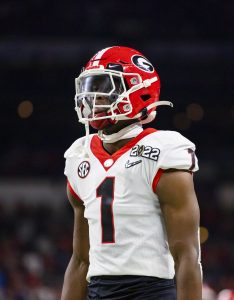 Pittsburgh let former Day 2 picks J.J. Smith-Schuster and James Washington walk in free agency, turning instead to Pickens, who will join ex-second-round pick Chase Claypool and ex-third-rounder Diontae Johnson as the Steelers’ top targets. Given the development of non-first-round receivers in Pittsburgh in the fairly recent past — a list that also includes Mike Wallace, Antonio Brown and Emmanuel Sanders — Pickens will be expected to contribute early.

Some teams had Pickens off their respective draft boards due to character concerns, and the three-year Georgia cog fell in the draft due to the ACL tear he sustained during spring workouts last year. But Pickens did not sit out his junior season, rehabbing to be a contributor late in the Bulldogs’ national championship campaign. Prior to the ACL setback, Pickens was poised to make a run at the 2022 first round. He totaled more than 1,200 receiving yards and notched 14 touchdown receptions as an underclassman. This year, the 6-foot-3 target ran a 4.47-second 40-yard dash at the Combine.

Pittsburgh’s Pickens pick may also be indicative of potential plans with Johnson, who is going into a contract year. The Steelers did re-sign Smith-Schuster to a one-year deal in 2021 but have famously been stingy with second contracts for receivers. Brown’s two extensions mark the exception. Pickens and fourth-round pick Calvin Austin III supply rookie-contract talent here. Johnson has said he wants to stay with the Steelers beyond his first contract. Two years remain on Claypool’s rookie deal.