Free agent pass rusher Jason Pierre-Paul is still available and looking for his next NFL home. According to Tom Pelissero of NFL Network, Pierre-Paul took another step toward that goal today, taking a visit to Baltimore. 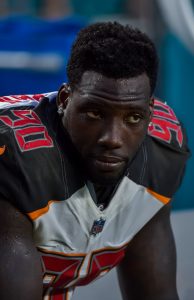 Pierre-Paul, 33, spent the first eight years of his career in New York, after the Giants selected him with their first pick of the 2010 NFL Draft. He saw early success with the Giants, being named a first-team All-Pro and Pro Bowler in his second NFL season after finishing second in the league in tackles for loss (23.0) and fourth in the league in sacks (16.5).

In 2018, New York traded Pierre-Paul to the Buccaneers in exchange for a third-round pick and a swap of fourth-round picks. He immediately outplayed his trade capital, leading the team in sacks (12.5) and tackles for loss (16.0) during his first year in Tampa Bay.

Over the course of a 12-year career, Pierre-Paul has totaled 91.5 sacks and 122.0 tackles for loss. He’s had his share of injuries throughout his career. Some were natural football-injuries that required surgery, but, twice, Pierre-Paul experienced substantial injuries outside of football that nearly cost him his career. His most recent season saw him miss time due to a torn rotator cuff that he called “the worst injury of his career,” according to Luke Easterling of USA Today.

Baltimore is certainly in the market for a veteran pass rusher. The Ravens return Tyus Bowser and Odafe Oweh at the top of their depth chart, with the former working to come back from a torn Achilles injury suffered in Week 18 of last season. They’ve seen limited results out of three-year pass rusher Jaylon Ferguson and 2021 fifth-round pick Daelin Hayes only saw one game of action last season. The Ravens did draft Michigan’s David Ojabo in the second round of this year’s Draft, but a torn Achilles suffered during his pro day is likely to hold him out for much of his rookie season.

Enter: Pierre-Paul. Pierre-Paul has an extensive pass rushing resume to bring to Baltimore. While his recent injury may prevent him from being an immediate upgrade over Bowser or Oweh, his presence would give the Ravens some much-needed depth in their pass-rushing rotation.