This time of the offseason is rife with teams looking to round out their depth charts with available veterans who can help fill remaining roster holes. In the case of the Ravens, that could lead them to be players on the edge rusher market. 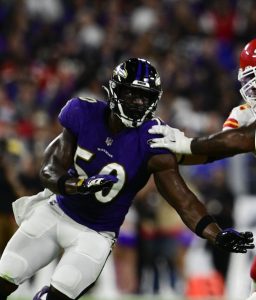 Jeff Zrebiec of the Athletic (subscription required) writes that Baltimore will “likely still sign a free agent pass rusher”. The team has already added a number of notable players on defense recently, including veteran cornerback Kyle Fuller. Their front seven could stand to be bolstered further, though.

The Ravens currently have Tyus Bowser and Odafe Oweh at the top of their depth chart at the outside linebacker position. The former stepped into a larger role after the departures of Matt Judon and Yannick Ngakoue last offseason, and responded by putting up career highs in sacks (seven) and tackles (59). However, he suffered a torn Achilles in the season finale, putting his Week 1 availability in question.

That would place an even heavier burden on Oweh, who flashed potential with a five-sack rookie campaign, and the team’s other young options at the position, Jaylon Ferguson, Daelin Hayes and, potentially at some point this season, David Ojabo. As a result, it came as little surprise when general manager Eric DeCosta said in April that the team wasn’t finished making additions in the edge department. However, the team didn’t select a pass rusher in the draft other than the injured Ojabo, leaving the June free agent market as the last realistic avenue to add to the unit.

With respect to veterans, the likeliest move could be a reunion with Justin Houston. The Ravens placed the rarely-used UFA tender on the 33-year-old last month, pointing to another low-cost, one-year deal being possible in the near future. The longtime Chief totalled 4.5 sacks in 15 games, providing an experienced presence to an otherwise young unit. If not Houston, other options for the Ravens to target include Trey Flowers and Jason Pierre-Paul. By training camp, the team could very well have signed one of those three, or another edge rusher, to add depth to a position group facing a number of questions.