The Browns, like everyone else in the football world, continue to await the outcome of the Deshaun Watson hearing, which recently concluded. They are widely expected to be without their Pro Bowl acquisition for a significant stretch of the 2022 season, something the team prepared for with the way his contract is arranged. 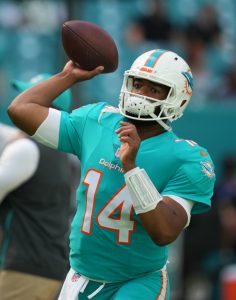 However, it appears they didn’t foresee a year-long suspension – which the NFL has quite publicly been seeking – as a potential outcome. Mary Kay Cabot of cleveland.com writes that Cleveland signed Jacoby Brissett working under the assumption that Watson would be suspended for “the first quarter of the season or so.”

Relying on the 29-year-old over the course of an entire campaign, she continues, was a scenario the team “didn’t envision” when they signed him one day after trading for Watson. Brissett has started 37 of his 60 career games, including two different years in Indianapolis as the No. 1 and a handful of contests last season in Miami. His numbers haven’t stood out at any juncture, but he could be reasonably expected to keep the team’s offense afloat for the short- to intermediate-term should Watson receive a suspension which still allows him to see the field in 2022.

If Brissett does end up as the full-time starter for this season, though, he will be insulated by a deep roster around him. The Browns boast arguably the league’s top running back tandem, a receiving corps now led by Amari Cooper, and a strong defense. Still, his track record would lead to understandable questions about the team’s ability to make the postseason in a highly-talented AFC – something Cleveland’s front office didn’t have in mind when making the ‘win-now’ move of trading for Watson.

With the Baker Mayfield situation still unresolved, and plenty of cap space to add another signal-caller such as Jimmy Garoppolo, the Browns do, of course, have alternatives to Brissett for 17 games. Turning to him for that long would, apparently though, be a reaction to unforeseen circumstances on the team’s part.