The Eagles have finished their draft class signings for 2022. They signed second-round center Cam Jurgens on Friday, locking down the final member of their five-man class. 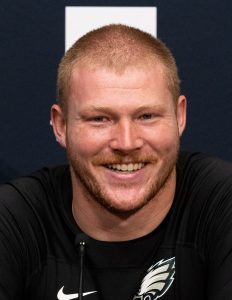 This marked the second straight year the Eagles used a second-round pick on an interior offensive lineman. They drafted Alabama’s Landon Dickerson in 2021, and while Dickerson finished his Crimson Tide career as a center, he moved alongside Jason Kelce to start his pro career. Jurgens looks more like Kelce’s heir apparent. Philly obtained Jurgens with the No. 51 overall pick.

Jurgens started at center nearly throughout his Nebraska career, moving into the Cornhuskers’ lineup as a redshirt freshman in 2019. The Beatrice, Neb., native was the first true or redshirt freshman center to start a Huskers season opener. While Jurgens maxed out at third-team All-Big Ten honors in 2021, he became the second center from this class selected — behind 2021 first-team All-Big Ten snapper Tyler Linderbaum — this year.

Kelce, 34, put off retirement for another year, alerting the Eagles he would be back just before free agency began. The All-Pro blocker is signed through 2023. Jurgens’ rookie contract will run through 2025. Kelce has been a first-team All-Pro center in four of the past five seasons, putting himself on the Hall of Fame radar. This certainly gives Philly a qualified mentor for Jurgens, who did not see notable time at guard in college.