Von Miller started off his Bills tenure well, notching two sacks against the Rams and spearheading Buffalo’s seven-sack night. Miller chose the Bills over the Rams and Cowboys in free agency, but the rumors connecting the future Hall of Famer and the defending Super Bowl champions nearly moved the Bills in another direction. 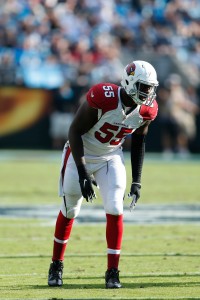 Miller said this offseason he was 90% sure he would re-sign with the Rams. The Bills undoubtedly believed there was a good chance Miller would stay in Los Angeles, as Jourdan Rodrigue of The Athletic notes Buffalo was initially set to pursue Chandler Jones (subscription required).

The consensus belief Miller would stay in L.A. led to the Bills-Jones connection, per Rodrigue, who adds the Rams expected to retain Miller as well. The Bills became aware of a contract matter that ended up altering the Miller sweepstakes. Learning of the Rams’ proposal containing two guaranteed years, the Bills made the rare move of including a third guaranteed year. Miller said this summer that ended up pushing him to Buffalo.

Buffalo’s six-year, $120MM Miller contract includes a lower per-year average through 2024 than the Rams’ proposal carried, but Miller’s Bills deal has $10.7MM guaranteed in 2024. The Rams were unwilling to break a precedent in this chase, per Rodrigue, who notes this Rams regime has never offered a player a third guaranteed season. Los Angeles’ three-year Aaron Donald deal features a nonguaranteed 2024 season.

A loose Jones-Bills connection emerged ahead of free agency, though several other teams were interested. Once the legal tampering period began, however, the Raiders loomed for Jones. The former Patriots and Cardinals defender signed a three-year, $52.5MM accord hours before the 2022 league year began. Miller’s Bills pact became finalized hours later.

Jones, 32, is a year younger than Miller. But the two-time All-Pro appeared to be Buffalo’s backup plan here. The Bills had pursued a Miller trade before the 2021 season, though they were not connected to calling the Broncos on him before the in-season Rams swap. The Cardinals, who had Jones winding down his 2017 extension, and Cowboys were believed to be the Broncos’ other options there. Miller is signed through the 2027 season; he has said he will aim to play out the contract.