After he underwent successful surgery on his injured thumb yesterday, attention surrounding Dak Prescott will now turn towards his recovery timeline. The Cowboys are optimistic that their franchise quarterback’s absence will be shorter than initially expected. 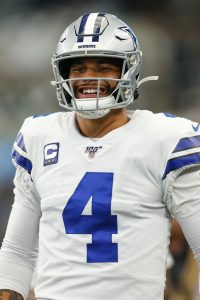 Team owner Jerry Jones said this morning that the team will not be placing Prescott on IR (Twitter link via Jon Machota of The Athletic). Doing so was the expectation after the news of his injury broke, and would have guaranteed that Prescott missed the Cowboys’ next four games. Instead, this move leaves open the possibility that he could return in less than one month.

The recovery timetable was initially reported to be six to eight weeks. However, NFL Network’s Tom Pelissero tweets that Prescott’s window to return could actually be four to six weeks, making the team’s decision a more understandable one. Dallas will play the Bengals in Week 2, followed by divisional games against the Giants and Commanders. A three-week absence through that stretch could set up Prescott for a return in Week 5 against the Rams. Prescott not going to IR will allow him to practice, when that time comes.

Perhaps more realistically, another key NFC East contest in Philadelphia the following week could be the time at which the two-time Pro Bowler is back on the field. In any event, the fact that the Cowboys are optimistic Prescott will be available for multiple games before their bye week is a significant and encouraging update for their offense. In the absence of Amari Cooper and Tyron Smith in particular, expectations were raised for Prescott to carry the unit which led the league in scoring last year.

Given the team’s positive outlook, it comes as little surprise that Jones also confirmed (via Calvin Watkins of the Dallas Morning News, on Twitter) the Cowboys will not be pursuing a veteran backup. Cooper Rush will fill in for Prescott for the time being, leaving Will Grier as the No. 2. Should Prescott be able to return in just a few weeks, their performances will be less impactful on Dallas’ season than it originally seemed.