Jets Not Considering Sticking With Joe Flacco As Starter

SEPTEMBER 25: Wilson is expected to be cleared by doctors next week, as Ian Rapoport of NFL.com reports (Twitter link). Assuming that happens, Wilson will be in line to start the Jets’ Week 4 contest against the Steelers.

Per Rapoport, Wilson has experienced no setbacks in his recovery and has continued to make good progress.

SEPTEMBER 22: The highwater marks of the past two Jets seasons have come with their high-end quarterback prospect sidelined. Nearly a year after Mike White‘s 400-yard game keyed an upset over the Bengals, Joe Flacco led the NFL’s first 13-point comeback inside of two minutes in 21 years.

But the development of Zach Wilson remains the team’s objective. While Flacco will start in Week 3, Robert Saleh said the Jets will not hesitate to go back to their second-year starter once he is ready ready to return. Wilson remains out due to the August knee surgery he underwent. 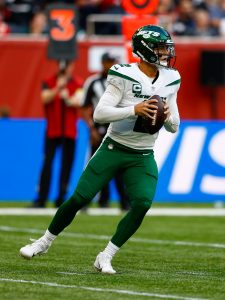 “Zach’s the future of the organization. We all know that,” Saleh said, via the New York Post’s Brian Costello. “As soon as the doctors clear him, we’ll get him on the field.”

Flacco’s throwback performance in Cleveland (307 yards, four touchdown passes) could prompt calls for the Jets to keep their 37-year-old backup in the mix. This would remind of the brief Jets QB quandary that came about last season after White’s work against the Bengals. White’s four-interception game against the Bills two weeks later quieted the campaigns for him to keep the gig. After one Flacco start, Wilson was back under center for the final games of the season.

Saleh said before the season Wilson would miss at least the team’s first three games. The former No. 2 overall pick returning in Week 4 is not yet a certainty. Wilson will ramp up his activity this week, but Saleh did not guarantee next week will be the BYU product’s return window. That still looks to remain a realistic target, at least, according to Tom Pelissero of NFL.com (on Twitter). Week 3 will mark Wilson’s seventh missed game as a pro.

Their Cleveland comeback notwithstanding, the Jets remain a rebuilding team. They added a few pieces on offense to further assist Wilson — from guard Laken Tomlinson to No. 10 overall pick Garrett Wilson — but his injuries and rookie-year struggles have injected some doubt into the team’s quarterback plan. It remains relatively early, however, as Zach Wilson has not yet taken a regular-season snap with Gang Green’s improved offense. A fair amount of pressure could await the young quarterback upon returning, however. It will be interesting to see how long of a leash Saleh provides if Wilson (30th in 2021 QBR) is ineffective when he comes back.