The Buccaneers are expected to once again have one of the league’s most potent passing attacks in 2022. Much of the team’s success in that department will depend on the health status of Pro Bowl receiver Chris Godwin. Today saw an encouraging piece of news on that front. 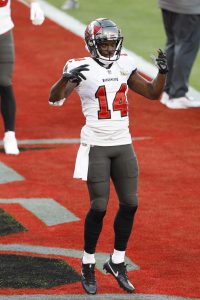 Godwin practiced without a knee brace, as detailed by NFL Network’s Ian Rapoport (video link). That marks another notable milestone in his recovery from the torn ACL which ended his 2021 campaign. Despite being limited to 14 games as a result of the injury, he topped 1,000 yards for the second time in his career. That left him as one of several big-name free agents Tampa Bay had to find a way to re-sign this offseason.

The team was able to do just that, signing the 26-year-old to a three-year, $60MM deal. The move signalled confidence that Godwin would be able to recover in full, and remain an instrumental part of the Buccaneers’ high-octane offense pairing with Mike Evans. Notable additions were nevertheless made, including Russell Gage and Julio Jones in free agency; that quartet will give Tom Brady plenty of options even in a pass-catching corps which no longer includes Rob Gronkowski.

Those deals have, of course, led to some surprising moves with respect to roster cuts. Chief among them was 2020 fifth-rounder Tyler Johnson being lost to the Texans on waivers last week. A healthy Godwin would once again provide significant production from the slot, though, alleviating the potential concerns generated by Johnson’s absence.

If Godwin continues to make progress throughout the week, he could be available to play in Week 1. It will likely take several days for his status to be confirmed one way or another, but his season-long outlook at the least continues to look positive – something which will be highly important for him individually and one of the NFC’s presumed heavyweights generally.