A number of new faces have raised expectations for the Lions in 2022, but the return of a familiar one could give the team a significant boost in the secondary. Cornerback Jeff Okudah is in line to start the season at full health, which will allow him to occupy the position the team envisioned for him in during the 2020 draft. 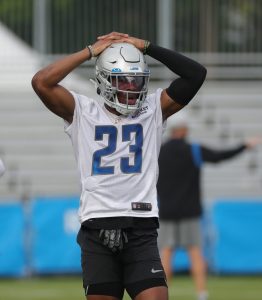 The No. 3 selection in that year’s draft, Okudah’s NFL career has been marred by injuries. He missed seven games as a rookie, then suffered a torn Achilles during Detroit’s season opener last year. That substantial amount of time spent on the sidelines has derailed his development, and led to questions about where he would line up upon his return to health.

In June, it was reported that the team was not considering a position change in the wake of potential mobility concerns. Slated to remain a boundary corner, then, the Ohio State product entered training camp and the preseason with a perceived need to reclaim his starting spot. His summer performances have allowed him to do just that.

Head coach Dan Campbell confirmed, via team reporter Tim Twentyman, that Okudah will remain a first-teamer when the regular season begins. “I thought he did some good things,” Campbell said after the team’s preseason finale. “I feel like he’s been trending in the right direction now for two weeks.”

Okudah would provide the Lions with an effective 1-2 tandem at the position should he return to form. Amani Oruwariye enjoyed a breakout season in Okudah’s absence last year, posting six interceptions and 11 pass deflections. That performance could land him an extension, though Okudah could be on his rookie deal for three more years if Detroit picks up his fifth-year option.

Much of that decision, of course, will depend on his ability to recover from a major injury and live up to his draft stock. With a starting spot in hand, he will have every opportunity to do so.