Jason Pierre-Paul‘s second Ravens visit this year will end up producing a deal. The veteran edge rusher told CBS Sports’ Josina Anderson he is signing with the team (Twitter link). It is a one-year deal worth up to $5.5MM for JPP, according to ProFootballNetwork.com’s Aaron Wilson and NFL.com’s Ian Rapoport (on Twitter).

The 12-year veteran was at the team’s facility Tuesday but did not sign. While this seemed to repeat the pattern from earlier this year, when JPP visited the Ravens in June but left without a contract, the AFC North team is not letting the accomplished defender leave this time. Pierre-Paul, 33, will join a Ravens team in need at outside linebacker. The Ravens had been in contact with Pierre-Paul for months, per Rapoport. 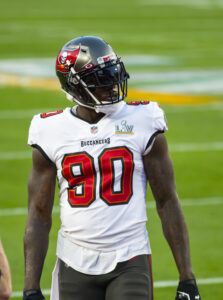 This position group is shorthanded because of both tragedy and injuries. Jaylon Ferguson‘s death in June rocked the organization. The team had bigger plans for Ferguson this year. Tyus Bowser and second-round pick David Ojabo are coming off Achilles injuries, setbacks that landed them on different Ravens unavailability lists to start the season. Neither Ojabo (IR) nor Bowser (reserve/PUP) can return until Week 5. Ojabo, who suffered his Achilles tear while preparing for the draft in March, will likely need more recovery time than Bowser, who sustained his tear in January. The Ravens also just placed Steven Means on IR after his season-ending Achilles tear.

Pierre-Paul, who is joining Baltimore’s active roster, could certainly help the team. Baltimore is down to two outside linebackers on its 53-man roster — Odafe Oweh and Justin Houston, the latter being re-signed in the wake of Ferguson’s death. As veteran edge players steadily came off the free agency board this summer (from Houston to Melvin Ingram to Carlos Dunlap to Trey Flowers), JPP remained unsigned. But he will likely soon suit up for a third NFL team.

The 6-foot-5 sack artist spent the past four seasons with the Buccaneers, playing a significant role in their Super Bowl LV championship. JPP sacked Aaron Rodgers twice in the 2020 NFC championship game, with the Bucs upsetting the David Bakhtiari-less Packers en route to their second Super Bowl. Pierre-Paul, who made his third Pro Bowl in 2020, teamed with Shaq Barrett combined to pressure Patrick Mahomes throughout that hometown victory.

Although JPP (91.5 career sacks) did not finish his Tampa tenure well, recording just 2.5 sacks and five QB hits in 12 games, the Ravens will hope that is a blip rather than an indication the former first-round pick can no longer contribute. JPP will almost certainly be ticketed for a rotational role, as opposed to the starting gigs he had held for the past 11 years. A Giants backup as a rookie, Pierre-Paul broke through with a monster 2011 season — one that did plenty to key the Giants’ Super Bowl XLVI win — and has seven seasons with at least seven sacks.

Pierre-Paul underwent shoulder surgery this offseason, and ESPN.com’s Jeremy Fowler notes that led to the lengthy free agency stay (Twitter link). But surgeries have not exactly derailed him in the past. He completed comebacks from the 2015 fireworks accident and a fractured vertebra sustained in a 2019 car accident, leading to a 2020 Bucs re-signing. A 2020 knee operation commenced after that deal. His Ravens contract does not come close to the two-year, $25MM accord he signed in 2020, but this agreement will allow for a 13th NFL season.