Yesterday’s game against the Dolphins resulted in losses both on and off the scoreboard for the Ravens. Defensive end Steven Means suffered a torn Achilles yesterday, as confirmed by head coach John Harbaugh. 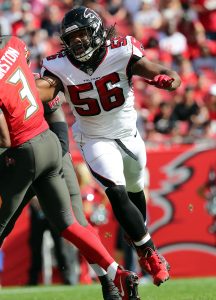 The 32-year-old saw the field for one-third of Baltimore’s defensive snaps in Week 1, but but only logged one snap yesterday. The veteran was brought in during the post-draft wave of free agency to provide depth at a position of need for the Ravens, and playing time was likely to remain available for the foreseeable future for him.

Means had become a full-time starter last season, his third with the Falcons. While he didn’t record any sacks, he set a new career-high with 43 tackles, setting him up for at least a rotational role in Baltimore. Instead, the former fifth-rounder is now dealing with an Achilles tear for the second time in his career, having suffered one in 2019.

The same fate has already befallen Ravens tackle Ja’Wuan James, who had been operating as the team’s starting left tackle in the absence of Ronnie Stanley before going down last week. In the season opener, cornerback Kyle Fuller also suffered a torn ACL, bringing the number of season-ending injuries the Ravens have already suffered to three – a figure which harkens back to last year when numerous key players were sidelined throughout the campaign.

Without Means, the Ravens will need to rely even more heavily on Odafe Oweh and Justin Houston, now the team’s only two healthy outside linebackers on the 53-man roster. 2021 sack leader Tyus Bowser and second-round rookie David Ojabo are each recovering from Achilles tears of their own, leaving the team dangerously thin in the edge-rush department until at least one of them returns. In all likelihood, Baltimore will elevate recent signing Kyler Fackrell from the practice squad as they aim to get back in the win column against the Patriots.