On this date in 2018, the Josh Gordon saga ended in Cleveland. Following six-plus years of controversy, the Browns shipped the embattled wideout to the Patriots for a fifth-round pick. 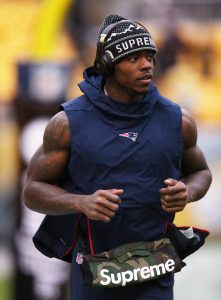 A second-round pick in the 2012 NFL Supplemental Draft, Gordon quickly made a name for himself in Cleveland. Following a productive rookie campaign, the receiver exploded in 2013. Despite missing the first two games for violating the NFL’s substance-abuse policy, Gordon finished the year with 87 receptions for 1,646 yards and nine touchdowns, earning him first-team All-Pro honors.

Gordon was slapped with another suspension prior to the 2014 campaign, but the ban was reduced to 10 games and the receiver proceeded to average about 61 yards per game in his five appearances. The NFL laid down the hammer the following offseason, suspending Gordon for the entire 2015 campaign. He was set to return after sitting out the first four games of the 2016 campaign, but he ended up stepping away from the NFL for the entire season.

He was finally reinstated late during the 2017 campaign, and after spending two years away from the game, Gordon finished with 335 receiving yards in five contests. There was hope that he’d emerge as a main piece in Cleveland’s offense for the 2018 campaign, but he quickly found himself in the dog house. While the organization publicly stated they were frustrated with Gordon’s hamstring injury, some in the Browns’ organization reportedly believed Gordon slipped in his recovery program, and it was his rampant off-field issues that finally prompted the Browns to cut the cord.

The Browns later indicated that they were prepared to cut the wideout, but a trade market naturally developed. Cleveland preferred to send Gordon to the NFC, with Dallas, Washington, and San Francisco emerging as potential suitors. While the Browns were seeking a sixth-round pick, New England ponied by a fifth rounder and acquired the receiver on September 17, 2018.

It was a low-risk move for a Patriots team that had previously gambled on reclamation projects, and it was assumed the wideout would have the shortest of leashes with Bill Belichick in charge. From an on-field perspective, the Patriots were in desperate need of receivers. With Julian Edelman sitting out the first four games due to a suspension, Tom Brady was eyeing Chris Hogan and Phillip Dorsett as his top wideouts. Gordon immediately came in and produced, finishing with 40 receptions for 720 yards and three touchdowns.

Gordon once again stepped away from the NFL towards the end of that season, with the NFL later revealing that he was facing an indefinite ban for violating the terms of his conditional reinstatement. The Patriots proceeded to move on and win the Super Bowl without Gordon’s services.

The wideout returned for the 2019 season, and he started each of the Patriots first six games, collecting 20 receptions for 287 yards and one touchdown. A knee injury landed him on IR, and the Patriots ended up cutting bait with him in October. He later caught on with the Seahawks, but he hauled in only seven receptions in five games before getting hit with his fifth career suspension for violating the league’s substance abuse policy. Gordon sat out the entire 2020 campaign before reemerging with the Chiefs last year, where he got into 12 games. He signed with the Titans practice squad earlier this month.

There was hope that Gordon may be able to revive his career in New England. While the receiver showed that he could still be productive when he was on the field, he also continued to prove that he couldn’t be counted on from an off-field perspective. Four years later, the 31-year-old is currently fighting to keep his career alive.

One comment on “This Date In Transactions History: Browns Trade WR Josh Gordon To Patriots”