Latavius Murray may well become a key factor in the Broncos’ rushing attack. The veteran declined a promotion to the Saints’ 53-man roster in order to accept the Broncos’ offer of joining their active roster, but he is not expected to suit up for Denver’s Thursday matchup.

Citing a quick turnaround from Murray’s London game and his move into a new offense, the Broncos will keep Murray on the shelf for tonight’s Colts tilt, Ian Rapoport of NFL.com tweets. Murray remains on the Broncos’ active roster; he just will be a gameday inactive. 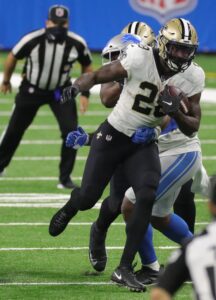 The Broncos are instead elevating running back Devine Ozigbo from their practice squad. Ozigbo will join Melvin Gordon and Mike Boone as Denver’s active backs in Week 5. Despite having been benched for his fumble against the Raiders, Gordon is expected to work as the Broncos’ lead back tonight, Tom Pelissero of NFL.com tweets. It is safe to assume Gordon’s leash, in light of his fourth fumble in four games (running his Denver total to 11 — most among running backs since 2020), will be short.

Using the CBA’s gameday elevation provision, the Saints bumped Murray up to their active roster ahead of their London matchup with the Vikings. Murray logged 11 carried for 57 yards and a touchdown against his former team but reverted to New Orleans’ taxi squad after the game. He then trekked from London to New Orleans to Denver. Murray, 32, will have an extra week and change to get up to speed in Nathaniel Hackett‘s offense. The Broncos face the Chargers in Week 6’s Monday-night game.

Additionally, the Broncos promoted safety Anthony Harris to their active roster. Like Murray, Harris was in Minnesota during now-Denver GM George Paton’s lengthy tenure; the eighth-year defender joined the Broncos’ practice squad last month but has not played for the team yet. Harris sought a release from the Eagles’ practice squad, in order to select a better path toward a 2022 role. The ex-Vikings and Eagles starter should be on the field for his new team Thursday.

Harris, 30, has made 61 career starts. The Vikings franchise-tagged Harris in 2020 but did not prioritize retaining him in 2021, leading to an Eagles agreement. Harris was a full-time Philadelphia starter last season and re-signed on a lower-cost deal this offseason. But the Eagles were not as impressed with his training camp. Philly cut both Harris and Jaquiski Tartt, moving Marcus Epps into a full-time role and acquiring C.J. Gardner-Johnson from the Saints. While Harris circled back to Philly’s practice squad, he did not remain there long.

The Broncos will be without second-year safety P.J. Locke, who suffered a concussion against the Raiders, and Pro Bowler Justin Simmons remains on IR. Kareem Jackson and Caden Sterns have worked as Denver’s safety starters in Simmons’ absence. Harris, who led the NFL in interceptions with six in 2019, could see some snaps behind the starters.