The quarterback who began the season as the Panthers’ top option appears set to return tomorrow, but not in his previous role. Baker Mayfield worked with Carolina’s scout team during the week in practice, and interim head coach Steve Wilks said he should be available for tomorrow’s game against the Falcons (Twitter link via Joe Person of The Athletic). 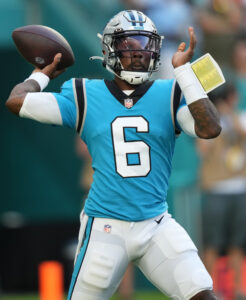 The former Browns starter suffered a high ankle sprain during what was ultimately Matt Rhule‘s final game as head coach. Two weeks was initially considered to be the short end of his recovery timeframe, before further testing revealed a torn ligament. That was expected to delay Mayfield’s return, but he has recovered quickly to the point where he can dress as a backup.

As Wilks suggested on Sunday, however, health would not guarantee Mayfield – or, for that matter, Sam Darnold, who has yet to suit up in 2022 – a first-team spot. The play of fourth-stringer P.J. Walker in the team’s win over the Buccaneers gave him the inside track to start against Atlanta. Wilks said earlier this week, via ESPN’s David Newton, that he “[saw] no reason not to” with respect to keeping Walker in place as the No. 1.

The former XFLer has already matched his career total in starts over the past two weeks from his previous seasons in Carolina. Walker threw for just 60 yards in the Panthers’ loss to the Rams, but had a far more effective and productive game (177 yards, two touchdowns) leading the team to their upset win over Tampa Bay. The decision to trade away receiver Robbie Anderson and running back Christian McCaffrey has left the Panthers’ offense without two notable skill position players, but Walker’s potential upside relative to Mayfield and Darnold make him a logical starting choice in at least the near-term future.

“He understands exactly where we’re going this week and knows his role,” Wilks said of Mayfield (Twitter link via Person). “And he was fine with it.”  How much of an opportunity the latter has to retake the No. 1 role after tomorrow will be worth watching as Carolina looks for its second straight victory of the Wilks era.