Rams’ Cam Akers To Miss Week 6, Could Be Traded

OCTOBER 16: Ian Rapoport of NFL.com reports that Akers may have already played his last down for the Rams. Per Rapoport, Akers and McVay have “philosophical and football-related differences,” and while the two men have remained cordial, LA is expected to field trade calls on the 2020 second-rounder. Despite his inability to return to the level of performance he enjoyed as a rookie, Akers — who appears concerned about his role and his place in the club’s RB hierarchy — is expected to garner significant trade interest.

OCTOBER 14: The Rams will not have Cam Akers in their lineup Sunday. Sean McVay confirmed the third-year running back will miss the team’s Panthers matchup due to personal reasons. 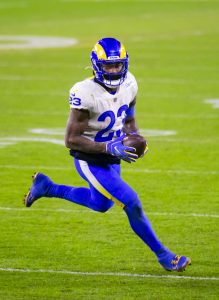 Akers missed the Rams’ Thursday practice due to a personal matter; he will not practice Friday. McVay said the parties are “working through some things.” This is a sudden development for the defending Super Bowl champions, who saw Akers make a fairly quick recovery from summer Achilles surgery to play during the playoffs last season.

McVay confirmed this is not a performance- or injury-related matter, and Jourdan Rodrigue of The Athletic notes the sixth-year HC was noncommittal regarding Akers’ status with the team going forward. This does appear to be a football-related matter, as CBS Sports’ Josina Anderson tweets. Akers is under contract through 2023. It would certainly be a surprising development to see a transaction made here, but the Rams’ backfield will undergo a change this week.

McVay limited Akers’ Week 1 workload and challenge him to show more urgency after that game. But the Rams have used Akers as their primary ball-carrier in recent weeks. He has led the team in carries in each of the past four games, relegating Darrell Henderson to a lesser role than he played in the season opener.

Henderson, who is in a contract year, will step back into the starting role Sunday. A 2019 third-round pick, Henderson has been slightly more effective for the Rams this season, though the team’s battered offensive line has hindered the run game. Henderson is averaging 4.1 yards per carry.

Although Akers has been the team’s preferred ball-carrying option since breaking through late in his 2020 rookie season, he has not recaptured his pre-Achilles-tear form. Akers averaged 4.3 yards per carry in 2020 and amassed 221 rushing yards during the team’s two playoff games that year. Last season, however, the Florida State product was ineffective upon his unexpectedly quick return from injury. Akers averaged just 2.6 yards in Los Angeles’ four postseason games and is at 3.0 (51 carries, 151 yards) in five games this season.

The Rams have Henderson and the recently reacquired Malcolm Brown on their active roster. Rookie Kyren Williams is eligible to return from IR, but he has not yet returned to practice. The team hoped to re-sign Jake Funk to its practice squad, but he instead ended up on New Orleans’ P-squad. Rookie UDFA Ronnie Rivers is the only back on L.A.’s taxi squad; the Fresno State product would be in position to be elevated for Week 6.

5 comments on “Rams’ Cam Akers To Miss Week 6, Could Be Traded”