Having already traded away two accomplished veterans on defense before the deadline, the Bears will go the rest of the way without their other defensive Pro Bowler.

The foot injury Eddie Jackson suffered against the Jets in Week 12 led the team to move him to IR, and NFL.com’s Ian Rapoport tweets the veteran safety is expected to miss the rest of the season. It is a Lisfranc injury, according to Rapoport and NFL.com’s Mike Garafolo (on Twitter). The Bears also moved Darnell Mooney to IR. The third-year wide receiver had already been ruled out for the season’s remainder. 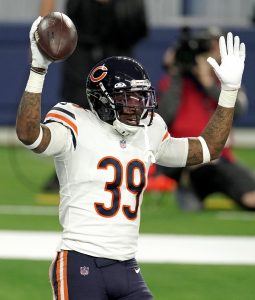 A fourth-round pick in 2017, Jackson is the longest-tenured Bears defensive starter. After the trade of Roquan Smith, he holds that distinction by a considerable margin. Jackson, whom the Bears extended immediately once be became eligible for a deal in January 2020, has lined up as a starter in all 88 games he has played — dating back to Week 1 of his rookie year. This will be the former Pro Bowler’s longest absence as a pro.

After giving Jackson his worst grade as a pro in 2021, Pro Football Focus viewed this as a bounce-back season. Jackson’s four interceptions lead the Bears — he is the only defender still with the team to have picked off more than one pass this season — and represent his highest INT total since his 2018 All-Pro campaign. Jackson has also forced two fumbles and registered 80 tackles.

The Bears already faced the Jets shorthanded in the secondary, with rookie starters Jaquan Brisker and Kyler Gordon missing what turned out to be another Mike White showcase event. Chicago, which traded Robert Quinn days before unloading Smith, has allowed at least 27 points in each of its past five games. Jackson’s absence will certainly make matters more difficult for a team barreling toward a top-five draft choice in 2023. The Bears have not picked in the top five since trading up for Mitch Trubisky in 2017.

Jackson’s four-year, $58.6MM extension calls for a nonguaranteed $13MM base salary in 2023. While the Bears stripped away every other piece from their Vic Fangio– and Chuck Pagano-era defenses this year, Adam Jahns of The Athletic notes all signs point to Jackson sticking around next season (subscription required). Jackson will turn 29 next week.