The Bills’ Nyheim Hines trade was not their only buzzer-beating move ahead of Tuesday’s deadline. Prior to the since-passed endpoint for NFL 2022 trading, the Bills acquired a familiar name to bolster their safety position.

They are trading for Falcons safety Dean Marlowe, according to ESPN.com’s Adam Schefter (on Twitter). The Bills are sending the Falcons a seventh-round pick for Marlowe, a New York native who spent three seasons with the Bills. 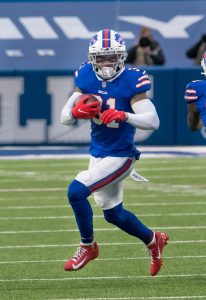 Marlowe, 30, played in Buffalo from 2018-20 but has been with the Lions and Falcons over the past two seasons. With Micah Hyde out for the season and Jordan Poyer suffering an injury in Week 8, the Bills will reunite with a player that should not have much trouble moving back into Sean McDermott‘s scheme.

Previously serving as a reserve behind Buffalo’s top-tier Hyde-Poyer tandem, Marlowe played in 26 games with McDermott’s team and started seven. Marlowe, who caught on with the Bills via a practice squad agreement in December 2017, returns to Buffalo as a higher-profile player capable of fortifying the team’s uncertain safety spot. He has 17 career starts during his NFL career, which began when he spent his rookie season as a Panthers reserve on their Super Bowl-bound 2015 squad.

It is not known how much time, if any, Poyer will miss. The veteran safety said he felt a pop in his elbow during the Bills’ win over the Packers on Sunday night. Poyer went through an MRI on Monday. If the Bills were forced to play without Poyer and Hyde, it would represent new territory for a team that has extracted considerable value since pairing the veterans in 2017. The Bills have used 2021 sixth-rounder Damar Hamlin as Hyde’s primary replacement, with fourth-year man Jaquan Johnson mixing in. Marlowe and Johnson represent the team’s top insurance options against a Poyer absence.

In the minutes before the deadline, the Falcons both received and sent out seventh-round picks. They traded a seventh for Chiefs cornerback Rashad Fenton, having seen injuries alter their corner situation, and recouped that value via Marlowe minutes later. Young talent Richie Grant and Jaylinn Hawkins are Atlanta’s starting safeties; Marlowe and Erik Harris served as depth pieces for the NFC South-leading team.

3 comments on “Bills To Acquire Dean Marlowe From Falcons”