Linked to teams this offseason, Ndamukong Suh has remained in free agency since his Buccaneers contract expired. The All-Decade defensive tackle who had never missed an NFL game due to injury has missed half the season.

But prospects of Suh resurfacing with a contender appear viable. The Eagles have discussed a deal with the veteran D-lineman this week, Jay Glazer of Fox Sports tweets. While the Eagles have since signed Linval Joseph, he may not have been a Suh backup plan. Despite the Eagles having signed Joseph, Glazer adds they remain interested in Suh (Twitter link). 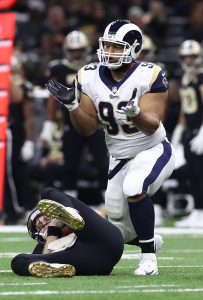 With Joseph and Robert Quinn being added in-season, the Eagles’ defensive line is now one of the most veteran-heavy position groups in recent memory. Joseph and Quinn joined a stable including Brandon Graham, Fletcher Cox, Javon Hargrave, Haason Reddick and Josh Sweat. Derek Barnett is also on Philly’s payroll, but the former first-round pick is out for the season.

Experience notwithstanding, the Eagles have run into some trouble defending the run. Joseph is in Philly to help with that issue. Suh’s skillset differs somewhat from Joseph’s, with far more pass-rushing production on the former’s resume, but the Eagles clearly sense an opportunity this season. Being 8-1, such aggressiveness makes sense.

Suh, 35, spent the past three seasons with the Bucs. But they moved in a different direction this offseason, drafting Logan Hall in the second round and signing Akiem Hicks. Connections to the Raiders, Vikings and Browns followed, though conflicting reports emerged on the Las Vegas and Cleveland fronts. This led to a quiet period for the durable veteran, who drifted off the radar for a stretch. But he joins Odell Beckham Jr. as a high-end free agent available for a contender seeking a second-half boost.

An Eagles fit would be interesting given the team’s investments at D-tackle. Cox, Hargrave and now Joseph populate Philly’s group inside, but Jordan Davis‘ return would minimize opportunities beyond the team’s top three here. The Eagles have missed Davis’ presence inside. Since the first-round pick went down against the Steelers, the Eagles have struggled against opposing rushing attacks. The Texans amassed 168 rushing yards in Week 9, while the Commanders totaled 152 in their upset win Monday. The Commanders kept going to the run well against the heavy favorite, too; their 49 attempts were the most by any non-Eagles or Ravens ground attack since 2018.