Linval Joseph will have a chance to see action in a 13th NFL season. The Eagles are signing the veteran defensive tackle, according to Adam Schefter of ESPN.com (on Twitter).

The former Giants, Vikings and Chargers interior defender recently visited the Jets. No signing followed, but the Eagles will provide an opportunity. Philadelphia has struggled against the run in each of its past two games; Joseph stands to provide some help for the 8-1 team on this front. 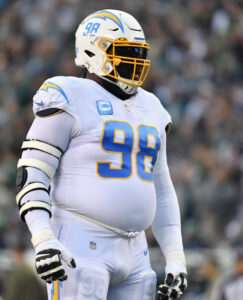 After playing out his two-year Chargers contract, Joseph has spent the past eight months in free agency. He will join an Eagles team that has devoted significant funds to its defensive line. Philly recently dealt for Robert Quinn, adding the veteran edge rusher to a position group that already featured five veteran contracts (Fletcher Cox, Brandon Graham, Javon Hargrave, Josh Sweat, Derek Barnett) and first-round pick Jordan Davis. The team has seen Davis’ recent absence hurt its efforts against the run.

Davis suffered a high ankle sprain in Week 8. In the two games without the mammoth D-tackle, the Eagles have respectively given up 168 and 152 rushing yards. Dameon Pierce did not experience much of a blip in his Offensive Rookie of the Year campaign against then-unbeaten Philly in Week 9, and the Commanders’ Brian Robinson–Antonio Gibson duo steadily wore down an Eagles defense on the field for much of Monday night’s upset loss. The Commanders’ 49 rush attempts were the most by a non-Eagle or Raven squad over the past five years.

At 34, Joseph should not be considered a candidate for an every-down role. After his two-year Chargers contract expired in March, not much free agency interest came the nose tackle’s way. But he has a lengthy history of being a run-game deterrent. His 330-plus-pound frame, as of 2021 at least, stands to help an Eagles team that has run into staffing issues on run downs recently.

The former Giants draftee broke into their starting lineup in his second season — Big Blue’s fourth Super Bowl-winning campaign — and used his New York tenure as a springboard to sign two nice Minnesota contracts and an L.A. accord. The former second-round pick served as a key cog during the Vikings’ run of top-10 defenses under Mike Zimmer in the late 2010s, working as a nose in Zimmer’s 4-3 scheme.

For his career, Joseph has started 162 games. That is in the top 30 all time for pure defensive tackles. With Cox and Hargrave present, Joseph may not have a chance to move into the top 20. But the Eagles are offering an opportunity for the veteran run defender to contribute for a Super Bowl contender.

In a corresponding move, the Eagles are placing Marlon Tuipulotu on IR, Mike Garafolo of NFL.com tweets. Tuipulotu has seen more time since Davis went down. The 2021 sixth-round pick has played at least 43% of Philadelphia’s defensive snaps over the past three games. But he will be shut down for at least the next four.