After beefing up their offensive line, the Chargers are turning their attention to the other side of the ball. On Wednesday, the Bolts reached agreement on a deal with free agent defensive tackle Linval Joseph (Twitter link via NFL.com’s Mike Garafolo).

It’s a two-year, $17MM deal for the former Vikings standout. He’ll be able to collect an additional $2MM, too, if he hits certain incentives. Joseph will receive $9.5MM guaranteed, per Mike Garafolo of NFL.com, who adds the veteran D-lineman declined a Vikings request for a pay cut (Twitter link).

Earlier this month, the Vikings dropped Joseph after seven seasons with the club. Between his release and the release of cornerback Xavier Rhodes, the Vikes carved out $18MM in cap space. The Chargers, who created room by cutting linebacker Thomas Davis and defensive tackle Brandon Mebane late last week, were happy to bring Joseph into the fold.

Joseph has often been one of the league’s best defensive tackles, and he made the Pro Bowl in back to back seasons from 2016-17. A second-round pick of the Giants way back in 2010, Joseph turned 31 in October and should have at least a couple more years left in the tank.

The East Carolina product should slide in as an immediate starter with Los Angeles, and the Chargers now quietly have one of the most talented defensive fronts in the league. With Joseph in the middle and stud edge rushers Melvin Ingram and Joey Bosa on either side of him, the Chargers will be very hard to block.

Three seasons remained on Xavier Rhodes‘ five-year, $70.1MM contract. Instead, the Vikings will remove that deal from their books in an effort to create cap space.

These cuts will create over $18MM in cap space for the Vikings, who entered the day barely $1MM below the projected salary ceiling. This also marks a major shift for the Vikings, who spent years crafting extensions and adding to Mike Zimmer‘s veteran defense. But the team’s payroll, headlined by a fully guaranteed quarterback contract, became flooded with veteran contracts in recent years.

Rhodes’ play had declined considerably, although Joseph remained one of the league’s better interior defenders. The Vikings will need to fill holes at these spots, likely with cheaper and younger cogs. Minnesota has Trae Waynes and Mackensie Alexander as free agents as well, so the franchise that has drafted three first-round cornerbacks since 2013 will need to have a plan at this priority position.

Joseph, 31, and Rhodes, 29, were two of the best players at their respective positions as recently as 2017. Both made the 2016 and ’17 Pro Bowls, and Joseph graded as one of Pro Football Focus’ top players in both 2015 and ’17. They will head to free agency, with Joseph joining a strong defensive line group.

The Vikings have shifted their approach to the salary cap in order to preserve their core, ESPN.com’s Kevin Seifert writes. Like most teams, the Vikings previously refused to extend players when they had more than one year to go on a deal. This year, they actually went to defensive end Everson Griffen and nose tackle Linval Joseph with early offers.

By changing up their philosophy, the Vikings got cost certainty on two key defensive linemen who were poised to eventually cash in on the open market. Meanwhile, Joseph was happy to trade in some potential financial upside for security.

“This game doesn’t last forever, at the end of the day,” Joseph said. “It was a great opportunity. I felt like I had outplayed my contract. For the Vikings to come to me and try to get something done, I was happy with that.”

The Vikings have once again extended a key member of their defense. According to NFL.com’s Ian Rapoport (via Twitter), the organization has signed defensive tackle Linval Joseph to a four-year, $50MM extension. The deal reportedly contains $31.5MM in guaranteed money.

Following the team’s signing of defensive end Everson Griffen and cornerback Xavier Rhodes to extensions, we heard that Joseph was next of the docket. The Pro Bowler was reportedly seeking similar money to Griffen’s four-year, $57.9MM extension, and he came up just short with his current deal. Either way, Joseph still earned himself quite the payday, as the guaranteed money will only rank him behind Ndamukong Suh, Marcell Dareus, Fletcher Cox, Kawann Short among defensive tackles.

The 2010 second-round pick has established himself as one of the linchpins of the Vikings defense over the past several years. 2016 was arguably the best season of the 28-year-old’s career, as Joseph compiled career-highs in tackles (77), sacks (four), and forced fumbles (three). Pro Football Focus was particularly fond of his performance, ranking him 14th among 125 qualified interior defensive linemen.

As our own Connor Byrnes noted earlier this week, the Vikings shouldn’t have been in any rush to sign the defensive tackle. Prior to signing this contract, Joseph still had two seasons remaining on the five-year, $31.25 million contract he signed back in 2014. Still, the organization has clearly prioritized locking up their core. Besides signing both Rhodes and Griffen to extensions, the team also extended safety Harrison Smith last offseason.

The Vikings handed lucrative contract extensions to a pair of defensive linchpins in end Everson Griffen and cornerback Xavier Rhodes last week. Next on the docket is nose tackle Linval Joseph, who has talked about an extension with the team, reports Chris Tomasson of the Pioneer Press. Discussions between the two sides are “ongoing,” per Tomasson, who adds that Joseph wants a deal similar to the four-year, $57.9MM accord the Vikings gave Griffen.

A Griffen-esque payday for Joseph would make him the seventh D-tackle to secure a contract worth upward of $14MM per year, notes Tomasson. Such a deal would put Joseph in company with Ndamukong Suh, Fletcher Cox, Kawann Short, Marcell Dareus, Calais Campbell and Malik Jackson. Joseph hasn’t posted the lofty sack numbers of anyone in that sextet, having tallied 16.5 during his seven-year career, though he did tie a personal best with four last season. The adept run-stuffer also piled up 77 tackles and three forced fumbles during a 16-start 2016, the third such season of his career, and ranked an excellent 14th in performance among Pro Football Focus’ 125 qualified interior defensive linemen.

As great as Joseph has been for the Vikings since they signed the ex-Giant as a free agent prior to the 2014 season, inking him to a new deal isn’t something they absolutely have to do right now. Joseph, 28, still has two seasons remaining on his five-year, $31.25 million contract, and he doesn’t seem to regard securing an extension as a must.

“Whatever happens, happens,’’ Joseph told Tomasson. “If it’s time, it’s time (to get an extension). If not, I’m going to keep grinding.’’

In the event Minnesota does lock up Joseph soon, it’ll be the fourth time the franchise has awarded a big-money deal to a defender in the past year-plus. In June 2016, well before Griffen and Rhodes got their contracts, the Vikings extended safety Harrison Smith. Those three and Joseph are part of an enviable core of defenders that helped Minnesota’s ‘D’ finish toward the top of the NFL in yardage (third), scoring (sixth) and DVOA (eighth) in 2016. 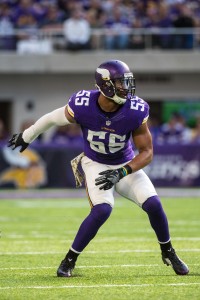