Josh Kline Could Re-Sign With Vikings

Although the Vikings released guard Josh Kline on Wednesday, a reunion between the two parties “isn’t out of the question,” reports Ben Goessling of the Star Tribune (Twitter link). 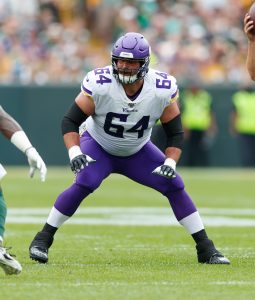 Minnesota attempted to get Kline to restructure his contract before cutting him, per Goessling. In this case, “restructure” almost assuredly meant “pay cut,” something Kline was apparently unwilling to do. The 30-year-old Kline signed a three-year, $15.5MM pact with the Vikings just last offseason, but made it through only one year before being released. Minnesota saved $1.56MM in cap space by parting ways with Kline but absorbed $4.46MM in dead money.

Kline, who has also spent time with the Patriots and Titans, played in 13 games for the Vikings a year ago, missing the other three contests due to injury. Pro Football Focus graded him the league’s 42nd-best guard among 63 qualifiers. He now joins a free agent guard market that also includes Andrus Peat, Ronald Leary, and Daryl Williams, among others.

The Vikings have released right guard Josh Kline, according to a club announcement. The move will save the Vikes $1.57MM against the cap while leaving $4.46MM in dead money.

Kline joined the Vikings on a three-year, $15.5MM deal in 2019, with $7.25MM of that sum guaranteed. He went on to play 71.7% of the team’s regular season snaps across 13 games, missing the other three due to injuries. This season also marked the end of his consecutive starts streak – he tallied 51, up until he missed Week 4 against the Bears.

Kline, who has also spent time with the Titans and Patriots, will likely find work elsewhere at a lesser rate.

The Vikings seem to have found their replacement for Nick Easton. On Wednesday, the team agreed to sign offensive lineman Josh Kline, according to a source who spoke with ESPN.com’s Courtney Cronin (on Twitter). It’ll be a three-year, $15.75MM deal when all is said and done.

Kline signed a four-year, $26MM deal ($12MM guaranteed) with the Titans last offseason, but the team moved on from him after he rejected a pay cut earlier this month. The lineman started all 16 games in 2018, although the advanced metrics imply that he took a step back from his previous seasons. After rating as a fringe top-20 guard in 2017, Pro Football Focus graded Kline 50th among 77 eligible guards in 2018.

The Vikings need some reinforcement on the offensive line, which is exactly what Kline can provide. At the moment, it appears that he’ll be in line to serve as the team’s starting right guard.

Interestingly, his new deal gives him a comparable average annual value to his previous deal, so he probably made the right call by rejecting the Titans’ push for a pay cut.

Josh Kline is expected to meet with the Vikings. ESPN’s Ben Goessling reports (via Twitter) that the veteran offensive guard is currently “coordinating visits with different teams,” a grouping that will presumably include Minnesota.

We learned yesterday that the Vikings had interest in Kline, whom Tennessee released several days ago. In Minnesota, the 29-year-old would compete for Minnesota’s starting right guard job, which Mike Remmers had held down since the end of the 2017 campaign. The Vikings released Remmers last week.

Kline signed a four-year, $26MM deal ($12MM guaranteed) with the Titans last offseason, but the team ended up moving on from him after Kline rejected a pay cut. The lineman started all 16 games in 2018, although the advanced metrics imply that he took a step back from his previous seasons. After rating as a fringe top-20 guard in 2017, Pro Football Focus graded Kline 50th among 77 eligible guards in 2018.

The Vikings need some reinforcement on the offensive line, and the team reportedly made a push to keep Nick Easton in Minnesota. Ultimately, the lineman signed a four-year deal with the Saints.

The Vikings are interested in former Titans right guard Josh Kline, per Darren Wolfson of KSTP.com (via Twitter). Kline, whom Tennessee released several days ago, would compete for Minnesota’s starting RG job, which Mike Remmers had held down since the end of the 2017 campaign. The Vikings released Remmers last week.

It is difficult to say, however, whether Kline would be a marked upgrade. He has been a full-time starter since 2015, his last season with the Patriots, and the advanced metrics appreciated his play in 2016 and 2017, his first two years with the Titans. However, he took a noticeable step back last season after signing a four-year, $26MM deal with Tennessee. Pro Football Focus graded Kline 50th among 77 eligible guards in 2018, while Remmers was graded 48th. Remmers, soon to be 30, is less than one year older than Kline.

Of course, advanced metrics don’t tell the whole story, and Kline has proven he is capable of more than what he showed last year. Minnesota’s biggest need entering free agency was the offensive line, and the club has still not made any moves to address that need.

But given the Vikings’ limited cap space, it was clear they would have to wait until the second wave of free agency anyway, and it appears they may be on the verge of two signings. In addition to its interest in Kline, Minnesota has made an offer to Nick Easton, who was expected to serve as the team’s left guard in 2018. Easton, though, suffered a herniated disc in training camp and missed the entire season as a result.

Easton has several offers in hand and is expected to make his decision by tomorrow.

Josh Kline‘s tenure in Tennessee has come to an end. The Titans are planning on releasing the offensive lineman, reports Titans reporter Paul Kuharsky (via Twitter).

NFL.com’s Ian Rapoport tweets that the guard turned down a pay cut, which would have kept him on the team. Instead, he’s set to his free agency for a second-straight offseason.

Kline signed a four-year, $26MM deal ($12MM guaranteed) with the Titans last offseason. He proceeded to start all 16 games last season, although the advanced metrics imply that he took a step back in 2018. After rating as a fringe top-20 guard in 2017, Pro Football Focus graded Kline 50th among 77 eligible guards in 2018.

The Titans have already added one offensive guard in Rodger Saffold. If the Titans don’t make any additions to their offensive line, they could turn to Kevin Pamphile, Corey Levin, or Dennis Kelly to start opposite their free agent addition.