Jerry Tillery did not work out with the Chargers, but a fourth of the league wanted to greenlight a contract-year audition. Eight teams attempted to claim the fourth-year defensive lineman, according to ESPN.com’s Adam Schefter (on Twitter). The Raiders won out.

In addition to Las Vegas, which now holds the No. 2 spot in the waiver order, the Lions, Panthers, Colts, 49ers, Jets, Giants and Chiefs submitted claims for the former first-round pick. Considering Tillery’s history, the interest is not too surprising. His midseason Bolts exit does make the claim volume notable, however. 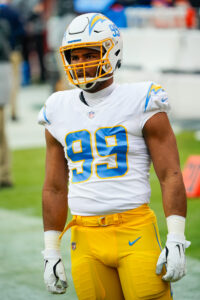 Tillery, who follows defensive lineman John Cominsky in drawing eight waiver claims this year, is signed for the remainder of the season. The Chargers passed on Tillery’s fifth-year option in May and moved him out of the picture for good late last week. This number of interested teams does open the door to a potential market in free agency come March.

This marks yet another D-line addition for the Raiders, who restocked their front during the Dave Ziegler–Josh McDaniels regime’s first offseason. Bilal Nichols, Andrew Billings and rookies Matthew Butler and Neil Farrell comprise Las Vegas’ top interior D-line options. The Raiders had re-signed Jon Gruden-era pickup Johnathan Hankins but ended up trading him to the Cowboys before the deadline.

Chosen 28th overall out of Notre Dame in 2019, Tillery has 29 starts under his belt. He has tallied 10.5 career sacks and 12 tackles for loss in three-plus seasons. Tillery notched 14 quarterback hits during the 2020 and ’21 seasons. The new Bolts regime did not view him as much of a fit, signing Sebastian Joseph-Day and Austin Johnson in free agency and not picking up his 2023 option. Despite Johnson going down for the season, the Chargers followed through on ending Tillery’s tenure. With the Fighting Irish in 2018, Tillery recorded eight sacks to move onto the first-round radar.

Pro Football Focus rates Tillery just inside the top 50 among interior D-linemen this season; that mark is well north of the reviews the site gave from 2019-21. Tillery, 26, also finished his Chargers career having suffered a back injury while weightlifting. The Raiders and the septet of teams that did not end up landing him, however, were clearly unconcerned by that development. While the Raiders season has skidded off track, Tillery’s Silver and Black audition will be interesting.