Ezekiel Elliott To Return In Week 11

The Cowboys will welcome back their top running back after a two-week absence today. Ezekiel Elliott is suiting up against the Vikings after dealing with a knee injury. 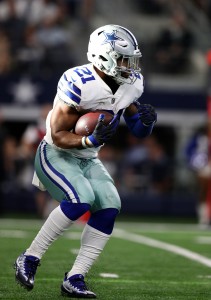 Both Elliott and the team expressed an expectation that he would be be able to play last week against the Packers, but Dallas once again turned to Tony Pollard as their workhorse back during that contest. Now, though, they will have both members of their backfield duo available against Minnesota, allowing Elliott to pick up where he left off prior to the injury.

The 27-year-old had put up 78 and 81 rushing yards – his two highest figures so far this season – in two of his last three games before suffering the injury. Overall, Elliott has amassed 443 yards and four touchdowns in 2022, averaging 4.1 yards per carry (roughly in line with his previous two seasons, but short of his career average of 4.5).

Jerry Jones recently confirmed that Elliott would remain a focal point of the Cowboys’ offense upon his return, despite Pollard’s continued effectiveness. In the two games where he was the undisputed lead back, the former fourth-rounder totaled 246 yards and four touchdowns on the ground. His 6.0 yards per carry average is a career-high, and will no doubt boost his free agency value during the coming offseason.

It is at that point that Elliott will no longer have any guaranteed money remaining on the mega-extension he signed in 2019. That has led many to expect a notable move of some kind at the position for Dallas, with Elliott’s 2023 cap hit of $16.7MM representing a significant financial burden and an obstacle to retaining Pollard. In the immediate future, though, the pair will likely once again operate in a timeshare within Dallas’ offense as the team looks to get back on track against a Vikings defense which ranks mid-pack against the run.