NOVEMBER 5: Patterson will be back in uniform this week. The Falcons are activating him from IR, Mike Garafolo of NFL.com tweets. This will only be Atlanta’s second injury activation used this season. Six such moves remain.

NOVEMBER 2: During Cordarrelle Patterson‘s injury hiatus, the Falcons have climbed into first place in the NFC South. The increasingly run-oriented team may have its top running back in uniform soon. 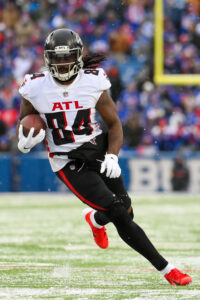 The Falcons designated Patterson to return from IR on Wednesday. Patterson has been out with a knee injury, missing Atlanta’s past four games. Being designated for return would allow the decorated kick returner to play this weekend, but the Falcons have three weeks to activate the late-blooming back. Patterson underwent a minor knee procedure on Oct. 3; the Falcons will see how he looks in practice.

The NFL’s oldest active starting running back, at 31, Patterson displayed continued explosiveness before going down with the knee ailment. He broke through for 120 rushing yards in Week 1 and set a new career-high mark with 141 against the Seahawks in Week 3. Patterson contributed to the Falcons’ Week 4 win over the Browns but went on IR shortly after.

An All-Decade return man, Patterson re-signed with the Falcons this offseason on a two-year, $10.5MM deal. The Falcons have benefited from taking a flier on Patterson in 2021 and trying him at running back. The former receiver washout-turned-dominant kick returner finished with a career-high (by far) 1,166 scrimmage yards last season.

This season, the Falcons have found some serviceable replacements for Patterson — players that figure to be contributors even when the starter returns. Tyler Allgeier and Caleb Huntley have combined for 589 rushing yards this season. The Falcons chose Allgeier in the fifth round and promoted Huntley, a former UDFA, off their practice squad during the season. Atlanta ranks sixth in total offense, reaching this perch despite a low-volume passing attack. Patterson stands to help in that area as well, as the team attempts a legitimate playoff pursuit.