NOVEMBER 22: Despite the nature of Jackson’s recovery timeline, head coach Brian Daboll indicated that he will likely not be placed on IR (Twitter link via Dan Duggan of The Athletic). That could suggest optimism with respect to the extent of the injury, or simply be a reflection of the limited activations the Giants have remaining.

NOVEMBER 21: Already dealing with the likelihood Week 1 cornerback starter Aaron Robinson will not play again this season, the Giants encountered more misfortune at this position. Adoree’ Jackson will miss extensive time due to an MCL sprain. 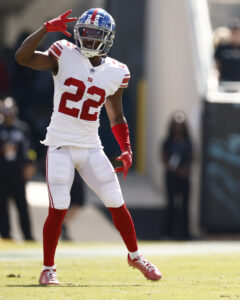 Classifying the veteran cover man’s timetable as between four and six weeks, NFL.com’s Ian Rapoport illustrates a tough road for the Giants’ secondary (Twitter link). Jackson went down during the Giants’ 31-18 loss to the Lions; this could be his longest hiatus since missing most of the 2020 season with a knee injury.

Should Jackson land on IR, the Giants have a few injury activations left. After moving Shane Lemieux back onto its active roster, the team has three activations remaining.

Despite that knee trouble shelving Jackson for 13 games two seasons ago, the Giants came in with a big offer to bring the former first-round pick to the Big Apple. Jackson is attached to a three-year, $39MM contract. The Giants have seen the ex-USC standout return to form; Pro Football Focus ranked Jackson as a top-25 corner last season and has done so again through 10 games this year. The 5-foot-11 defender has forced a fumble and recovered two this season.

The Giants made Jackson, 27, the centerpiece of their cornerback plan this season. The team addressed other needs with its top three draft choices and made James Bradberry, who was on a three-year deal worth $45MM, a belated cap casualty post-draft. Don Martindale‘s defense has managed to get by without Bradberry and without its top pass rushers at points; the unit ranks 15th against the pass.

New York has in-season pickup Fabian Moreau starting in place of Robinson, while slot man Darnay Holmes has joined Jackson as the team’s other primary corners in recent weeks. Third-round pick Cor’Dale Flott returned after a lengthy absence Sunday, and second-year UDFA Nick McCloud played more in Week 11 as a result of Jackson’s injury. This combination will be asked to hold down the fort in crucial games. Seeking their first playoff berth since 2016, the Giants (7-3) face NFC East opponents over their next four games.