NOVEMBER 19: Johnson could soon see game action. Three days after adding him on a practice squad deal, the Saints are promoting the veteran running back to their active roster. Johnson has not played since last season. 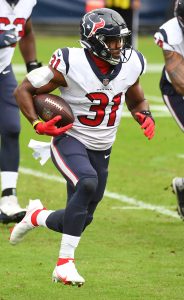 This move comes shortly after the Saints released Jordan Howard and Derrick Gore from their 16-man P-squad. Johnson, 30, met with the team in mid-June. While the sides could not agree on terms at that point, the former Cardinals and Texans back will settle for a practice squad spot months later.

Despite Johnson’s experience and somewhat distant past as an All-Pro-caliber producer, he was not connected to any other teams this offseason. He played out his contract with the Texans last season, after agreeing to rework it, and took his time in free agency. Johnson’s price was too high for the Saints in June, leading to him spending the season’s first half without a team.

The former third-round pick, however, has done very well for himself on the contract front. He parlayed a dominant 2016 slate (2,118 scrimmage yards, 20 touchdowns) into a three-year, $39MM Cardinals extension ahead of the 2018 season. The Cardinals included him in 2020’s DeAndre Hopkins trade, and while the Texans adjusted his deal, Johnson still locked in $4.25MM guaranteed in 2021.

Johnson has not come especially close to replicating that monster sophomore slate. A wrist injury knocked him out for almost all of the 2017 campaign, and by the time he returned in 2018, Bruce Arians had retired and the Cards suddenly sported the league’s worst offense. The Northern Iowa product missed eight games during his Texans stay, again becoming part of a rebuilding situation. After totaling 1,005 scrimmage yards as Houston’s featured back in 2020, Johnson took a backseat last season, when he finished with 453 yards on just 99 touches.

When Johnson visited the Saints this summer, speculation swirled about the team needing more insurance alongside Mark Ingram — Johnson’s ex-Texans teammate — against a potential Alvin Kamara suspension. Arrested in Las Vegas in connection with an alleged assault, Kamara has seen his hearing continually delayed. It has since been tabled again, according to WDSU’s Fletcher Mackel (on Twitter). The perennial Pro Bowl back is next scheduled to appear in court Jan. 23, seemingly putting him in the clear of a suspension sidelining him this season.

The Saints have been on the lookout for backs this week. Prior to this Johnson addition, they tried to claim Eno Benjamin on waivers, ESPN.com’s Field Yates tweets. They joined the Chiefs and Seahawks in doing so. Instead, Benjamin — a Cardinals draftee a month after the Johnson trade — will traverse the Johnson path, going from Arizona to Houston.