Eno Benjamin did not make it past the top team in the current waiver hierarchy. The Texans submitted a claim for the former Cardinals running back, Adam Schefter of ESPN.com tweets.

A former seventh-round pick, Benjamin served as James Conner‘s top backup in Arizona this season. The Cardinals’ decision to cut Benjamin caught the contributor by surprise, per ESPN.com’s Josh Weinfuss (on Twitter). He will now have another chance in Houston, which is taking on this rookie contract. That deal runs through 2023. The Chiefs and Seahawks attempted to claim Benjamin, according to GoPHNX.com’s Howard Balzer (on Twitter). 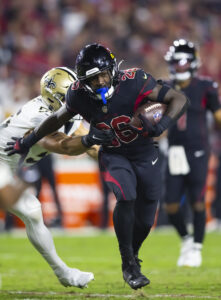 This move makes sense for Houston, which is still in the early stages of a lengthy rebuild. At 1-7-1, the Texans sit not only in pole position for next year’s No. 1 overall pick — though, it is early obviously — but they can win waiver battles by virtue of this record. The Texans have found a potential long-term starting back this year, in fourth-round rookie Dameon Pierce, but Benjamin can perhaps provide a complementary presence.

An Arizona State product, Benjamin did not play during his 2020 rookie slate but has seen action in the years since. The Cards turned to him to fill in for Conner during the recently re-signed starter’s injury hiatus. Benjamin has logged 70 carries for 299 yards and three touchdowns in 2022. The 5-foot-9 back has also contributed as an outlet receiver, catching 24 passes for 184 yards this season.

Since GM Nick Caserio‘s 2021 arrival, the Texans have cycled through a host of running backs. They added the likes of Rex Burkhead, Phillip Lindsay and Mark Ingram last year. Neither Lindsay nor Ingram finished the 2021 season with Houston, but the team extended Burkhead. This year, the Texans added Marlon Mack and Dare Ogunbowale to the mix. Mack did not make the team, but Pierce leapfrogged Houston’s veteran contingent and has launched an Offensive Rookie of the Year campaign.

Benjamin, 23, did not see his two quality Sun Devils seasons lead to much draft interest. He went 22nd in the 2020 draft. Still, he operated as a workhorse back at the Pac-12 program. Benjamin amassed 1,642 yards in 2018, ranking in the top five in Division I-FBS in rushing yards (fifth) and scrimmage yards (fourth, 1,905) as a sophomore. After another 1,000-yard slate as a junior, Benjamin followed the trend and bolted for the NFL rather than expose himself to another high-volume college workload. The Texans figure to still lean on Pierce (772 rushing yards; 4.7 per tote), but it will be somewhat interesting to see if Benjamin can carve out a role during the season’s second half.