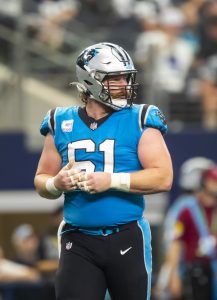 Matt Paradis has been available since March, but after undergoing ACL reconstructive surgery, the former Broncos and Panthers center needed several months to receive clearance. He has since received it, per NFL.com’s Tom Pelissero, who adds teams have expressed interest (Twitter link).

Despite coming into the NFL in 2014, Paradis did not see his first game action came until his age-26 season. That year turned out to be his most notable, with the Broncos turning to the former sixth-round pick as a starter during a Super Bowl-winning campaign. But Paradis is on the older end for a player with seven years’ experience. Now 33, the Boise State product is preparing to join a new team.

Paradis did not miss a snap in four of his seven seasons and made 98% of Carolina’s offensive snaps in 2019, but he suffered injuries in his Denver contract year (2018) and last season, limiting him to nine games in each. Like Chase Young, a year has already passed since Paradis’ ACL tear.

It will be interesting to see if a team signs Paradis soon, as proven O-linemen are generally scooped up. Paradis has made 98 career starts. Pro Football Focus preferred his Denver seasons to the years he logged in Carolina, but if healthy, the former Day 3 pick could be an upgrade for at least a few teams.