This year’s draft did not see a tight end go off the board until No. 55, when the Cardinals selected Colorado State’s Trey McBride. This position seems likely to have at least one first-rounder in 2023. 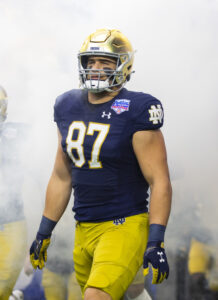 The best bet for such status will be Notre Dame’s Michael Mayer, who made it known Wednesday (via ESPN.com’s Pete Thamel) he is bypassing his senior season and entering the 2023 draft. Mayer will not play in the Fighting Irish’s Gator Bowl tilt against South Carolina. Gamecocks cornerback Cam Smith is also skipping that game.

Topping 800 receiving yards in each of the past two years, Mayer has been one of the most productive Division I-FBS tight ends in recent memory. His 180 receptions, 2,009 career receiving yards and 18 touchdowns rank first in Notre Dame history among tight ends. Those 180 catches rank third in Notre Dame history regardless of position. The 6-foot-4, 249-pound pass catcher ranks eighth on Mel Kiper Jr.’s most recent big board.

“The first reason I picked Notre Dame was the NFL; it was on my mind a very, very long time,” Mayer said, via Thamel. “I saw a lot of good tight ends in in the NFL from Notre Dame. That was one of the main reasons I went there.”

Kyle Rudolph, Cole Kmet, Durham Smythe and Tommy Tremble are currently carrying the Notre Dame banner among NFL tight ends, and the program has produced the likes of Dave Casper and Mark Bavaro. No Fighting Irish tight end has gone in the first round since the Bengals chose Tyler Eifert in 2013. Considering the dearth of reliable NFL receiving tight ends at present, Mayer stands to be quite the prize in 2023.