Henry Anderson could soon make his return to the field. The Panthers defensive lineman was designated to return from the NFI list today, as Aaron Wilson of ProFootballNetwork.com passes along (on Twitter). Anderson will now have three weeks to be activated to the active roster. 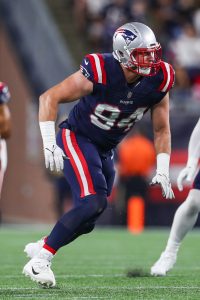 The veteran revealed today that he was placed on the non-football illness list after suffering a sudden stroke in late October, per ESPN’s David Newton. Leading up to the Panthers’ game against the Buccaneers, Anderson experienced numbness in his arms and legs and his speech became blurred. Specialists around the country couldn’t determine what caused the stroke, but the clot was removed and Anderson revealed that he’s felt “pretty normal” since.

The veteran returned to practice today and said he “felt good” after getting back into the swing of things. In fact, interim coach Steve Wilks said Anderson has a chance to play this weekend against the Seahawks.

“I’m a football player,” Anderson said. “If I’m cleared to play, I want to be out there and play football because that’s what I love to do. I’ve been injured several times throughout my career, and it’s always kind of overwhelming when you’re injured and not with the team, so if the doctors say I’m good to go and I’ve got clearance I want to be out there with my guys and playing with my brothers.”

After getting into four games with the Patriots in 2021, the 31-year-old was let go by New England at the end of the 2022 preseason. He soon caught on with the Panthers and got into six games before landing on NFI, compiling 12 tackles. The veteran has seen time in 84 career games across eight NFL seasons, including a 2018 campaign where he finished with a career-high seven sacks with the Jets.