The Dolphins’ offensive line should soon be getting some reinforcement. Miami designated offensive lineman Liam Eichenberg for return from injured reserve, as passed along by Aaron Wilson of ProFootballNetwork.com (via Twitter). 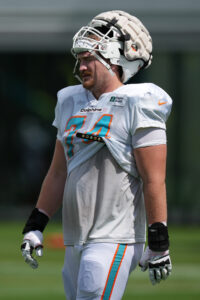 Eichenberg landed on injured reserve with a knee injury in early November. He ultimately sat out the required four games before returning to practice today. While it sounds like the offensive lineman is still ramping up, coach Mike McDaniel sounds anxious to reinsert the player into the starting lineup whenever he’s ready to go.

“Most of the [practice] will be on the side,” McDaniel said of Eichenberg (via Daniel Oyefusi of the Miami Herald), “but he’s done an unbelievable job of getting himself really to where he’s at from the injury. It’s to his credit that that type of injury he’s come back so fast. I’m excited for him because he was playing his best football when he got injured.”

The 2021 second-round pick started 16 of his 17 games as a rookie and started each of his eight games in 2022. While Pro Football Focus hasn’t been fond of Eichenberg’s performance through his first year-plus in the NFL, McDaniel indicated that the lineman was starting to find his own before getting sidelined with an injury.

The head coach’s vote of confidence seems to indicate that Eichenberg will slide back into the starting lineup. Robert Jones has started four games at left guard filling in for his injured teammate, and the second-year pro has shown better than Eichenberg, per PFF. This will be one of several OL questions for the Dolphins heading into the final stretch of the season, especially with Terron Armstead set to return.