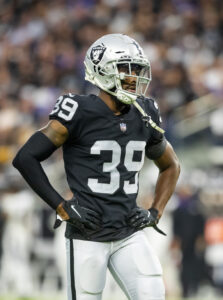 Hobbs, a 2021 fifth-rounder, had started each of the Raiders’ first five games this season after earning nine starts in his rookie campaign. As a rookie, the Illinois product tallied 74 tackles, a sack, and an interception, and while he yielded a healthy 82.3% completion rate on passes thrown in his direction, Pro Football Focus’ advanced metrics nonetheless deemed him one of the NFL’s best corners in 2021. PFF had him graded as the 29th-best CB in the league this year before he went on IR with a broken hand in mid-October.

Hobbs’ return is especially timely for Las Vegas, which was recently forced to place another starting corner, Anthony Averett, on injured reserve for the second time this season. Averett has not played especially well in his seven games of action, but the fact that the Raiders have not had their top three corners — Rock Ya-Sin, Averett, and Hobbs — on the field together after Week 1 is obviously suboptimal. The team is near the bottom of the league in terms of total defense and passing yards allowed per game, which is a major reason for its 4-7 record.

However, Josh McDaniels‘ troops have shown some moxie in winning their last two contests, both of which went to overtime. Getting Hobbs back should at least help stabilize the club’s secondary as it looks to keep its slim playoff hopes alive.

Cotton, meanwhile, has bounced between the Raiders’ active roster, taxi squad, and the unemployment line since signing with the team as a UDFA in 2019. Thanks to Las Vegas’ uncertain OL situation this year, he saw significant action in the first two weeks of the season, taking 90 snaps at right guard and earning his first career start in Week 2. Since then, he has played exclusively on special teams and has participated in just a handful of snaps per game.