Following a Friday meeting, the NFL’s proposal to modify the AFC playoff bracket in certain circumstances — in the aftermath of the Bills-Bengals game being ruled a no-contest — passed and will be implemented this season, Tom Pelissero of NFL.com reports (on Twitter).

Although the Bengals voiced persistent opposition, the proposal received the necessary 24 votes. The prospect of a neutral-site AFC championship game is now in play, along with a chance the Bengals and Ravens — in the event Baltimore defeats Cincinnati on Sunday — decide home field for a wild-card game via coin flip. The measure received 25 “yes” votes, according to Pro Football Talk’s Mike Florio (on Twitter).

To recap, the NFL’s cancelling of Week 17’s Bills-Bengals game led to a series of adjustments being discussed. While it does not appear expanding the playoffs to prevent a potentially unearned bye gained traction, the neutral-site reality is a go. Here are the scenarios in which the neutral-site modification will take effect:

This came about because the Bills (12-3) controlled their own destiny for the AFC’s No. 1 seed — a spot the franchise has not secured since 1993 — going into their Bengals matchup. By virtue of the no-contest ruling, the Chiefs (13-3) now have that path. Buffalo defeated Kansas City at Arrowhead Stadium this season, and because of the terrifying scene brought on by the Damar Hamlin injury and hospitalization, the NFL took a half-measure approach to account for this historically unusual postponement-turned-cancellation.

The Chiefs can still earn the AFC’s bye with a win Saturday over the Raiders, but if they meet the Bills again in the playoffs, the game will not be in Missouri. The Chiefs losing in Week 18 and the Bills winning would send a potential AFC title matchup to Buffalo, however, as Kansas City would not gain an edge from Buffalo’s no-contest in that scenario.

The Bills and Chiefs have met in each of the past two postseasons. Both games occurred in Kansas City, with the Chiefs winning each matchup. If the Chiefs lose Saturday or if the neutral-site scenario comes into play, it will be the first time they have played away from Arrowhead Stadium in the AFC playoffs since Patrick Mahomes‘ starter tenure began in 2018.

Roger Goodell will determine the neutral site. Indianapolis surfaced as a candidate Thursday, but Ian Rapoport of NFL.com notes (on Twitter) prioritizing an outdoor venue became part of the discussion. As of Friday, the potential neutral site is not known. Ford Field is off limits, Rapoport adds, while NOLA.com’s Jeff Duncan confirms the NFL has not talked to Superdome officials (Twitter links).

On the AFC North front, the Bengals (11-4) have clinched the division title because their win percentage will eclipse the 10-6 Ravens’ regardless of what happens in the teams’ Sunday meeting. Had the Bills won Monday and the Ravens defeated the Bengals in Week 18, Baltimore would have won the AFC North. The NFL factored that outcome into this emergency proposal.

If the Ravens win this weekend and the two teams meet up in the wild-card round, then a coin toss with determine the home site. Goodell will supervise the toss. The Bengals are favored to beat the Lamar Jackson-less Ravens on Sunday, but if they lose, the first part of Friday’s changes would come into play. 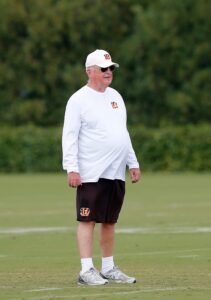 Though Cincinnati could benefit from the neutral-site wrinkle, Jonathan Jones of CBS Sports reports Bengals ownership attempted to convince the league’s owners to vote down the NFL’s proposal. The competition committee approved the proposal Thursday, but one of its members — Bengals executive VP Katie Blackburn — dissented due to this change happening late in the season and not during the offseason. The NFL rulebook calls for win percentage to decide playoff seeding, in the event an uneven number of games are played. Then again, the league has not seen one of its seasons involve disparate game counts since 1935. In light of the Hamlin scene causing that streak to end, the competition committee to act.

“The proper process for making rule change [sic] is in the off-season,” Blackburn wrote, via ESPN.com’s Seth Wickersham. “It is not appropriate to put teams in a position to vote for something that may introduce bias, favor one team over another or impact their own situation when the vote takes place immediately before the playoffs.”

Zac Taylor also voiced disappointment Friday the NFL is not going by win percentage. It is certainly understandable for the Bengals, who are known for voting against rule changes, to voice opposition; the change could hurt their chances of defending their AFC title. But Cincinnati is a seven-point favorite over a Tyler Huntley-quarterbacked Baltimore squad this week. Jackson was healthy when the Ravens defeated the Bengals. Taking care of business in Week 18 will remove the coin-flip component from these modifications.

The NFL expanded to seven-team playoff brackets per conference in 2020, after moving from five to six teams ahead of the 1990 season. But Friday marks the first in-season change to the playoff setup since 1982, when a players’ strike led to the league creating a 16-team field ahead of Super Bowl XVII. The AFC’s route to Super Bowl LVII will be quite confusing, should the favorites prevail.