The Ravens’ search for a new offensive coordinator has led them to a division foe. According to Mary Kay Cabot of Cleveland.com (via Twitter), the Ravens have requested permission to interview Browns wide receivers coach Chad O’Shea for their OC vacancy. 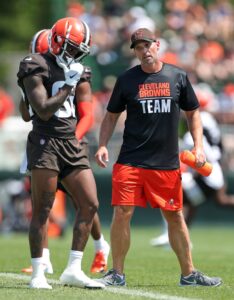 O’Shea spent time with the Chiefs and Vikings before a long stint with the Patriots. During his decade as New England’s wide receivers coach, the Patriots won three rings. He joined Brian Flores in Miami as the Dolphins’ offensive coordinator in 2019, but he only lasted a year before earning his walking papers. The 50-year-old has spent the past three years as the Browns wide receivers coach.

The Ravens parted ways with Greg Roman earlier this week, opening up a major hole on the coaching staff. We’ve since learned that Rams passing game coordinator and quarterbacks coach Zac Robinson is a candidate for the position, and more names will surely join the fray in the coming days. We also heard the other day that quarterback Lamar Jackson would play a role in the hiring of a new offensive coordinator.

While speaking to reporters earlier this week, Ravens coach John Harbaugh expressed his belief that Baltimore’s OC gig will be a highly sought-after job.

“This is going to be a highly sought-after job; this is one of the top football coaching jobs in the world,” Harbaugh said (via Cabot). “Everybody’s going to want this job. So, I’m looking forward to getting started, and it won’t just be me; it’ll be other coaches and scouts involved in it. We’re going to cast a wide net, and we’re going to look far and wide and close. We’ll get the best fit for what we’re trying to accomplish, and it’s going to be a highly-qualified candidate.”