Charles London‘s schedule is filling up. In addition to his Thursday interview with the Commanders, the Falcons’ quarterbacks coach will meet with the Titans, Jonathan Jones of CBS Sports tweets. 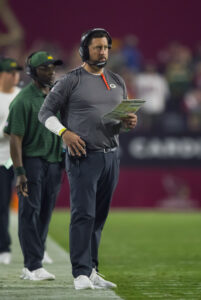 Tennessee is also interested in Justin Outten, though it is not certain the Denver OC is on the radar to replace Todd Downing. The Titans want to interview Outten for an unspecified staff position, Tom Pelissero of NFL.com notes (on Twitter). Nathaniel Hackett brought Outten over from Green Bay, making it unlikely he stays in Denver. Additionally, Pelissero tweets the Rams want to meet with Outten. Both the Rams and Titans are looking for an OC, but each team is requesting an Outten meeting for an unspecified job on their offensive staff.

London has been Atlanta’s QBs coach for two years, coming over shortly after Arthur Smith was hired, and has a history with the Titans. Although London’s roles as position coaches have come elsewhere, he stopped through Tennessee as an offensive assistant in 2011. That may be less relevant than London having spent two seasons working under Smith. The Titans have promoted their past two OCs (Smith, Downing) from within.

Outten went through a rather complicated year in Denver. Hackett attempted to interview Adam Stenavich and Jason Vrable, but the Packers blocked those moves. Those denials led to Outten’s Denver arrival. At the time, the Denver OC job was a non-play-calling opportunity. That changed down the stretch, with the embattled Hackett handing play-calling duties to QBs coach Klint Kubiak. This move bypassed Outten, who was previously the Packers’ tight ends coach. Outten, however, called plays during Denver’s final two regular-season games.

The Titans have already reached out to two Chiefs staffers — Eric Bieniemy and Matt Nagy — about the OC position. Because Andy Reid is the Chiefs’ primary play-caller, the Chiefs cannot block Bieniemy from taking the interview; the next Titans OC will call plays. More names should enter the equation soon, however.

The Rams’ OC search has not heated up yet, with Sean McVay recently indicating he will be back for a seventh season. An Outten hire for an unspecified position would be more interesting for the Titans, considering their play-caller is not yet in place. McVay is the Rams’ play-caller and has gone without an OC before.