The Vikings will have their starting receiver duo back in action this week. They activated Adam Thielen off their reserve/COVID-19 list Wednesday.

Thielen landed on the coronavirus list Nov. 23, and despite no reports indicating the veteran target contracted the virus, the Vikings were without their two-time Pro Bowl pass catcher against the Panthers. But Thielen is set to return to help the Vikes against the Jaguars.

Prior to his stay on the virus list, Thielen had done well to rebound from an injury-marred 2019. After missing the better part of seven games last season, Thielen caught 49 passes for 646 yards and a career-high 11 touchdowns through 10 games. Those 11 TDs led the NFL going into Week 12; Tyreek Hill‘s surge in Tampa now has the Chiefs deep threat pacing the league with 13 touchdown grabs.

Backups Chad Beebe and Bisi Johnson filled in well against Carolina, combining for 14 receptions in the one-point win. But the Vikings have structured their passing attack around the Thielen-Justin Jefferson duo, as they did around their Thielen-Stefon Diggs tandem for years. Thielen, 30, signed a four-year, $64MM extension in 2019.

One game out of the NFC’s third wild-card spot, the 5-6 Vikings are trying to become the fourth team since the merger to start 1-5 and make the playoffs. 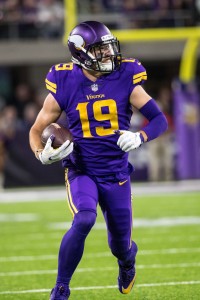 Following one of his best performances of the 2020 campaign, Vikings star wideout Adam Thielen has landed on the reserve/COVID-19 list (per an announcement from the organization).

The team didn’t provide any specific details on Thielen’s status, but we can assume the receiver either tested positive for COVID-19 or was within close contact of someone who did test positive.

The Vikings have recently placed six players on the COVID-19 list, but we know of only two players who definitively tested positive (linebacker Todd Davis and guard Dru Samia). ESPN’s Courtney Cronin observes that wide receivers coach Andrew Janocko wasn’t on the sideline for Sunday’s loss to the Cowboys, but there was no explanation for his absence.

The 30-year-old Thielen is having a bounce-back season, hauling in 49 catches for 646 yards and a league-leading 11 touchdowns (including two on Sunday). As Andrew Kramer of the Star Tribune writes, the “NFL requires a minimum five-day quarantine for high-risk close contacts and asymptomatic cases.” That means Thielen could be back in the lineup on Sunday against the Panthers.

There are a number of teams that would like to add a wide receiver in advance of Tuesday’s trade deadline, and Vikings wideout Adam Thielen would probably pique the interest of all of those clubs. However, as Jeremy Fowler of ESPN.com reports, Minnesota has no intention of dealing its 30-year-old receiver (Twitter link).

The Vikes are 1-5 and have already sold off one major asset by trading Yannick Ngakoue. They are also willing to deal safety Anthony Harris. However, both Ngakoue and Harris are set to hit free agency at the end of the season, while Thielen is under club control through 2024.

And while Minnesota looks dead in the water this year, there is still enough talent on the roster — including Thielen — to suggest that a rebound in 2021 could be in the cards. If the club plans to retool rather than rebuild, having Thielen in the fold would go a long way towards a return to contention next year.

Thielen and the Vikings agreed to a lucrative four-year extension in April 2019, and though injuries limited him to 10 games last season, he is on track for about 85 catches and over 1,100 receiving yards in 2020. That would be a little off the pace he set in his 2017-18 Pro Bowl campaigns, but those are still respectable numbers, and his 13.0 yards-per-reception average is right in line with his best seasons. He is also currently leading the league with seven TD catches this year.

There’s always a chance the Vikings could be blown away by an offer, especially since Thielen’s salaries throughout his contract are fairly manageable and since it would be easy enough for a team to get out of that contract at any point after the 2020 season is over. It just doesn’t seem like that’s going to happen, and WR-needy teams like the Browns, Ravens, Patriots, and Packers, among others, will need to turn their attention elsewhere (not that Minnesota would ever trade Thielen to Green Bay anyway).

Despite suffering an injury this week in practice, Adam Thielen will play against the 49ers. The Vikings have declared him active for their divisional-round game, but it sounds like the Pro Bowl wide receiver will play through some pain.

Thielen suffered a “deep laceration” near his ankle and heel area, Michael David Smith of Pro Football Talk reports. The Vikings plan to numb the area, tape up the injury and hope their standout wideout can play through any discomfort. The 29-year-old receiver expressed confidence earlier Saturday he will be able to play through this malady (Instagram link).

This injury occurred early this week in practice, with Smith indicating a Vikings teammate’s cleat cut through Thielen’s shoe to cause the laceration — one that required four stitches. No Achilles damage occurred. But this continues an injury-marred season for Thielen, who saw his two-year Pro Bowl run halt.

The former rookie-tryout success story missed five full games with a hamstring injury but missed most of two more because of that malady. However, he came through with one of the biggest Vikings catches this century to cap a seven-reception, 129-yard performance in an overtime win over the Saints. 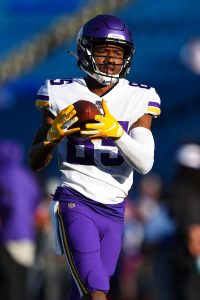