The Patriots have agreed to a brand new deal with special teams standout Justin Bethel (Twitter link via ESPN.com’s Mike Reiss). The new three-year, $6MM deal will tie Bethel to the Pats through 2023.

Early in his career, Bethel made a name for himself with the Cardinals. He made the Pro Bowl every year from 2013-2015 and stayed with the club through ’17. Then, he moved around a bit, spending time with the Falcons and Ravens before finding his place with the Patriots.

Roughly one year ago today, Bethel had surgery to repair a shoulder issue that had been hindering him. Fortunately, he was able to bounce back for the start of the season and appear in all 16 games for New England in 2020.

As speculation continues to swirl around Tom Brady, Tom E. Curran of NBC Sports Boston offers up an assuring and expected update for Patriots fans. No one knows what the quarterback will do when free agency begins, but the two sides are still in communication with each other. They’ve yet to meet, but texts are still being exchanged and head coach Bill Belichick has been among those in contact with the future Hall of Famer.

One source who spoke with Curran dismissed the notion that Brady has mentally divorced himself from the Pats.

“Of course not. There’s an attachment there. You can’t be someplace for 20 years and not have an attachment,” the anonymous source said. “That’s just not who he is.”

Brady will listen closely to the Patriots’ pitch, Curran writes, and he expects them to pinpoint all of the comforts they offer against the backdrop of the unknown that he might find elsewhere.

While we wait for Brady’s next move, here’s a look at more from the AFC East:

4:27pm: A day after the Ravens released Bethel for procedural purposes, the veteran cornerback/special-teamer visited the Patriots, according to Field Yates of ESPN.com (on Twitter).

Although Bethel did not work out as the Cardinals’ starting corner opposite Patrick Peterson, he has become a top special-teamer. Bill Belichick has been known to value that skill, and the 20th-year Patriots coach/exec is taking a look at one of this year’s top AFC rivals’ recently discarded assets.

Bethel, 29, made two tackles in seven Ravens games and recovered a fumble. John Harbaugh, a former special teams coordinator, called the veteran the best special teams player in the league. Bethel made the Pro Bowl three times for his special teams acumen, doing so from 2013-15 in Arizona. It will be interesting to see where he lands. The Patriots already employ a seven-time Pro Bowl special-teamer in Matthew Slater.

Because defensive lineman Brent Urban did not last on the Titans’ roster until Week 10, the Ravens lost their shot at a fourth-round compensatory pick. By dropping Bethel, they resumed their place in the queue. Baltimore values compensatory picks immensely, and it cost the franchise a key specialist in a 5-2 season. 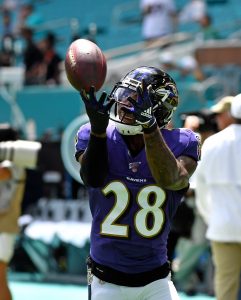 Bethel has been a starting cornerback in the past, as he played at least 25% of the Cardinals’ defensive snaps in each season from 2015-17. But he’s struggled in that capacity, and is known primarily for his work on special teams. A three-time Pro Bowler and two-time first-team All-Pro as a special teamer, Bethel played zero defensive snaps for the Falcons in 2018 but saw action on two-thirds of Atlanta’s ST snaps.

Bethel will have little opportunity to play defense in a Baltimore secondary that ranks as one of the league’s best (especially after adding Earl Thomas), but the Ravens have always placed a strong emphasis on special teams play. Bethel will play under new ST coordinator Chris Horton, who replaced longtime Ravens special teams coach Jerry Rosburg earlier today.

Bethel’s deal will be for one year, though the terms have of the deal have yet to be revealed, per ESPN’s Vaughn McLure (on Twitter).

Bethel, 27, has been one of the NFL’s most prominent gunners, having already been selected to three Pro Bowls, and has seen more time at cornerback in recent years with the Cardinals.

Bethel represents the Falcons’ biggest free-agent offseason splash thus far. Up until Saturday, their only free-agent addition was signing former 49ers guard Brandon Fusco and re-signing defensive end Derrick Shelby. The Falcons had hosted Bethel for a visit on Wednesday.

Bethel didn’t start a single game at cornerback in his first three years in the NFL after the Cardinals took him in the sixth round of the 2012 draft. Over the last three years, though, he’s accumulated 14 starts at cornerback opposite Patrick Peterson. He’s racked up four interceptions in that time, including a pick-six in each season.

The Falcons have Desmond Trufant and Robert Alford locked in at cornerback with long-term deals. While Bethel is likely to contribute on the Falcons’ special teams they are thin in their cornerback depth. Brian Poole, Blidi Wreh-Wilson and Marcelis Branch currently serve as the only other cornerbacks on the roster outside of Trufant and Alford.

Cornerback Justin Bethel will meet with the Falcons on Tuesday, according to a release from the team. This is Bethel’s first known free agent visit of this cycle.

Bethel earned three consecutive Pro Bowl nods from 2013-2015, mainly for his special teams work. At different times over the last three seasons, the Cardinals have tried to use Bethel as their No. 2 cornerback opposite star Patrick Peterson. The results were mixed, at best, though he does have four interceptions since 2015.

The Falcons have been pretty quiet in free agency thus far with with guard Brandon Fusco representing their only signing. If Bethel comes to Atlanta, it’ll be largely for special teams purposes with some reps behind starters Desmond Trufant and Robert Alford.