Last preseason, it looked like Sergio Bailey could be part of the Buccaneers’ future. Today, he’s without a job. Greg Auman of The Athletic reports (via Twitter) that Tampa Bay has waived the receiver. 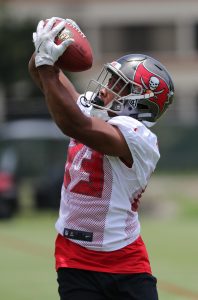 The Eastern Michigan product had a standout collegiate career, including a senior season where he hauled in 54 receptions for 878 yards and nine touchdowns. Despite the production, Bailey still went undrafted during the 2018 draft, and he ultimately caught on with the Buccaneers last April.

Bailey proceeded to have a s0lid preseason with Tampa Bay, collecting five receptions for 73 yards and one touchdown. Unfortunately, the receiver never got a chance to show his worth during the regular season, as an ankle injury forced him to be placed on the injured reserve.

The Buccaneers wide receiver corps will look a bit different in 2019 as both DeSean Jackson and Adam Humphries are now placing elsewhere. The team did add Breshad Perriman to play behind Mike Evans and Chris Godwin. However, it’s surprising that the Buccaneers didn’t hang on to Bailey to compete with the likes of Bobo Wilson, Justin Watson, K.J. Brent, and sixth-round rookie Scott Miller.