The Browns have informed offensive coordinator John DeFilippo that he will be released from his contract, reports ESPN’s Adam Caplan (via Twitter). The reporter adds that head coach Hue Jackson will call the offensive plays in 2016, meaning he’ll presumably go without an offensive coordinator. 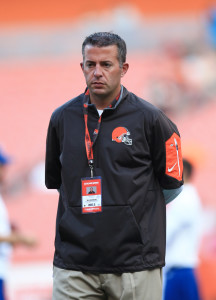 Jackson said yesterday that the Browns would likely go into next season without an OC. Jackson called plays the past two seasons with the Bengals, and he also had similar duties as head coach of the Raiders in 2011. Still, the new head coach is eyeing some big names for his coaching staff, having interviewed ex-Colts offensive coordinator Pep Hamilton yesterday. Earlier today, ESPN’s Josina Anderson tweeted that Hamilton was considering the position of assistant head coach with Cleveland. The team has also reportedly been eyeing Vikings running backs coach Kirby Wilson.

DeFilippo has been coaching since 2000, when he spent several years on the staff for Fordham, Notre Dame and Columbia. He got his first NFL gig as the offensive quality control coordinator with the Giants in 2005, and he’d go on to be the quarterbacks coach for the Raiders (two tenures), the Jets, and San Jose State. In early 2015, DeFilippo was hired as the Browns offensive coordinator. Mary Kay Cabot of Cleveland.com tweets that the coach still had two years left on his contract, which the Browns will be responsible for.