Rams May Use Transition Tag On Trumaine Johnson

If the Rams can’t work out a deal with pending free agent cornerback Trumaine Johnson, they will look at the option of using the transition tag, according to Jim Thomas of the St. Louis Post-Dispatch (Twitter link). Los Angeles has until March 1 to decide if it wants to use either the franchise or the transition tag on any of its free agents. 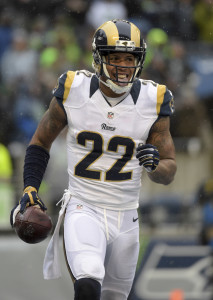 The transition tag — as explained in this PFR Glossary entry — entitles the player to either the average of the 10 highest-paid players at his position or 120% of his previous year’s salary, whichever is greater (in Johnson’s case, the former would be the higher figure). For corners, the charge is expected to be around $11.7MM for 2016. Johnson would be free to negotiate with other clubs, and if he signs an offer sheet that the Rams decide not to match, Los Angeles would receive no draft pick compensation.

The 26-year-old Johnson appeared in 14 games last season (he missed two late-season contests due to injury), playing 906 defensive snaps. He defensed 17 passes and intercepted seven, one of which he returned he returned 58 yards for a touchdown in Week 13. Johnson, a former third-round pick, was also a darling of the advanced metrics, as Pro Football Focus graded him as the No. 19 corner in 2015 — among free agent CBs, he came in fifth.

Johnson isn’t the only defensive back whom the Rams might look to re-sign this offseason, as cornerback Janoris Jenkins and safety Rodney McLeod are also headed for free agency. Elsewhere on the defense, lineman William Hayes is set to hit the open market, but Thomas reports (via Twitter) that Los Angeles is confident it can re-sign Hayes. We also heard earlier tonight that the Rams want to retain free agent linebacker Mark Barron.

The Rams will head into the offseason with more than $58MM in projected cap space, a number that was augmented by today’s release of defensive end Chris Long, linebacker James Laurinaitis, and tight end Jared Cook.