MARCH 13: The Lions say they “have nothing to announce today” regarding Tulloch’s roster status, according to Dave Birkett of the Detroit Free Press (Twitter link). Tulloch has a $500K roster bonus due today, so if Detroit doesn’t confirm his release today, it’s possible that he’ll stick around.

FEBRUARY 18: The Lions have informed Stephen Tulloch that he’ll be released at the start of the league year, a source tells PFT (on Twitter). The linebacker took to Instagram minutes ago with a message for Detroit fans, seemingly confirming the news. 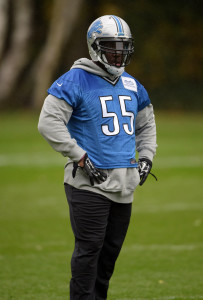 “What a journey it’s been Detroit!,” Tulloch wrote. “Five years of some of the greatest memories of my career. I can’t put into words how grateful I am to have played for such a great organization. I want thank the Ford family, the front office, the strength coaches, trainers, equipment staff, and everybody in between for everything you have done for me over the years. Last but not least I want to thank the community of Detroit for being behind me and my foundation over the years in making a difference in many lives. Such as life there is constant change. But change that I’m looking forward to. As one chapter closes in my career another one opens up.”

By cutting Tulloch, the Lions will save $6MM in cap space in 2016. Now, his dead money will count for just $1.3MM against the Lions’ cap.

Tulloch, 31, has spent the last five years with the Lions. He has played in all 16 regular games of each season except for in 2014. In a September contest against the Packers, Tulloch tore his ACL while celebrating a sack, ending his season prematurely. In 2015, he restored his ironman cred by playing in 16 games, racking up 108 total tackles, 1 sack, and 2 fumble recoveries.