10:49am: The Dolphins have officially submitted the paperwork on Vernon’s transition tag, tweets Jason La Canfora of CBSSports.com.

10:34am: The Dolphins are set to place the transition tag on defensive end Olivier Vernon in advance of this afternoon’s deadline, according to Rand Getlin of the NFL Network (Twitter link). The transition tag for Vernon will be worth $12.734MM, nearly $3MM less than the non-exclusive franchise tag. 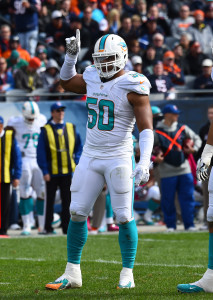 It’s a bit of a surprising decision from the Dolphins, who used the transition tag a year ago on tight end Charles Clay and ended up losing him to the Bills for nothing. While the non-exclusive franchise tag gives a team the right to two first-round picks if the player signs an offer sheet with another team, the Dolphins won’t receive any compensation if Vernon signs an offer sheet that Miami decides not to match.

The transition tag provides rival suitors some incentive to structure their offers in a way that will make it unappealing for the player’s current team to match it. That was the case a year ago for the Bills, who heavily frontloaded their offer sheet to Clay, fully guaranteeing $24.5MM of a total $38MM and including a $10MM second-year roster bonus.

Vernon, 25, is coming off a season in which he recorded 7.5 sacks to go along with 61 tackles. While his counting stats weren’t eye-popping, Vernon ranked as the league’s third-best edge defender according to Pro Football Focus’ grades, behind only Khalil Mack and Von Miller.

In his first four seasons in the NFL, Vernon has notched a total of 29 sacks, including a career-best 11.5 in 2013. Since he won’t turn 26 until October, the former third-round pick should have plenty of prime seasons left, which could make him an appealing target for some of the many NFL teams in need of pass-rush help.

While it’s possible that Vernon will simply return to the Dolphins on a one-year deal, or a multiyear extension, assigning the transition tag to him will help the club get a sense of his value on the open market. According to Mike Garafolo of FOX Sports (Twitter link), Miami has been willing to pay Vernon about $12MM per year on a long-term contract.

If no other teams are willing to top that price by a significant margin, the defensive end could return to the Dolphins. On the other hand, teams like the Jaguars and the Giants have far more cap space than Miami, and could make Vernon an offer that the Fins are unwilling to match.

Meanwhile, with Vernon on their cap with a charge of nearly $13MM, the Dolphins will likely make a few more moves to create room in the near future. Restructuring Ndamukong Suh‘s contract is a given, but it will be interesting to see whether the club also addresses contracts like Cameron Wake‘s and Jordan Cameron‘s in the coming days.

One comment on “Dolphins Put Transition Tag On Olivier Vernon”