TUESDAY, 11:17am: The Broncos have officially filed the paperwork on Miller, assigning him the exclusive franchise tag, as expected, tweets Albert Breer of the NFL Network.

SUNDAY, 7:54pm: The seldom-used exclusive franchise tag appears to be set for deployment in Denver, with the Broncos preparing to place their top protection measure on Von Miller, Troy Renck of the Denver Post reports.

Pushing to become the league’s highest-paid defender, Miller will not be permitted to negotiate with other teams as he would be if the Broncos were to use the non-exclusive franchise tag on the premier pass-rushing linebacker. Under the usual non-exclusive franchise tag teams use, other teams can negotiate with these performers but would have to surrender two first-round picks if they were to sign the tagged player to an offer sheet and the tagging team doesn’t match it. 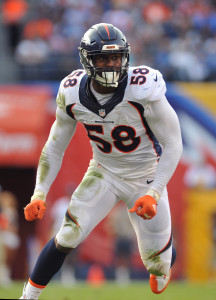 Miller would be entitled to an average of the top-five salaries at his position — once the restricted free agent signing period ends on April 22 — if designated with the exclusive tag. The non-exclusive franchise tag for linebackers has been set at $14.129MM.

However, the Broncos may actually be getting Miller, who turns 27 in March, on their cap at a cheaper rate by using the exclusive tag. Renck and Pro Football Talk report this rarely used measure is currently slated to be worth $14.04MM for linebackers.

In Miller’s case, the Broncos aren’t taking any chances, with the Super Bowl MVP’s value to a pass rush-needy team potentially worth the two first-rounders.

The Broncos will have until July 15 to sign Miller to a long-term extension that will likely approach or perhaps surpass the deal Ndamukong Suh signed with the Dolphins last March. Suh earns $19.06MM on average and signed for six years and $114.38MM, but as Mike Florio of PFT points out, Suh’s deal was built on what the free agent defensive tackle could have earned on the open market. Miller’s will have his franchise tag figures — $16.95MM in 2017 in the unlikely scenario Miller’s tagged again for a 20% raise — factored into it.

But the Broncos have signed each of the three players on which they applied the franchise tag under John Elway‘s leadership. Ryan Clady, Matt Prater and Demaryius Thomas signed long-term extensions after being slapped with the non-exclusive tag in 2012, 2013 and 2015, respectively. Miller is a two-time first-team All-Pro and holds a higher standing in the game than those talents, however.

Justin Houston, who received the non-exclusive tag from the Chiefs last year, is the game’s highest-paid linebacker after signing a six-year, $101MM deal last July. Houston received $52.5MM guaranteed in signing his extension in Kansas City, and Miller will obviously push for a greater portion of his pact to be guaranteed.

With Peyton Manning‘s $19MM salary still on the books as of Sunday night, the Broncos have just $8.4MM of cap room. The 39-year-old quarterback’s deal, however, almost certainly won’t be on the Broncos’ books for 2016, and that $19MM would go to helping the team attempt to secure its preferred free agents.

Now that Miller looks to be given the franchise tag, Jackson looks poised to hit the market.