MARCH 31: Johnson’s one-year contract features a $500K signing bonus and has a base value of $2MM, tweets Tom Pelissero of USA Today. According to Pelissero, the deal also includes up to $1MM in playing-time, INT, and Pro Bowl incentives.

MARCH 25: The Titans and free agent safety Rashad Johnson have agreed to terms on a one-year deal, reports Josina Anderson of ESPN.com (via Twitter). Financial terms of the agreement aren’t yet known, but the team has confirmed the move. 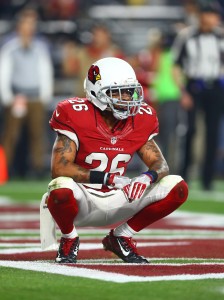 Johnson, 30, has been with the Cardinals since the team selected him in the third round of the 2009 draft. After starting his NFL career as a reserve and a special-teamer, the 30-year-old has found a place in Arizona’s starting lineup in recent years, making 30 starts for the team in 2014 and 2015.

During his time as a starter, Johnson has shown a knack for coming up with turnovers — in the past two seasons, he has racked up nine interceptions, including two for touchdowns, and three fumble recoveries. However, with Tyrann Mathieu, D.J. Swearinger, Tony Jefferson, and the newly-signed Tyvon Branch among the players potentially in the mix at safety for the Cardinals in 2016, Johnson will be moving on after spending seven seasons with the club.

The Titans have one solid starting safety in Da’Norris Searcy, but were a little thin at the position after parting ways with veteran safety Michael Griffin earlier in the offseason.

Johnson didn’t earn a spot on our list of 2016’s top 50 free agents, but ranked as the seventh-best safety in our breakdown of the winter’s top defensive free agents.